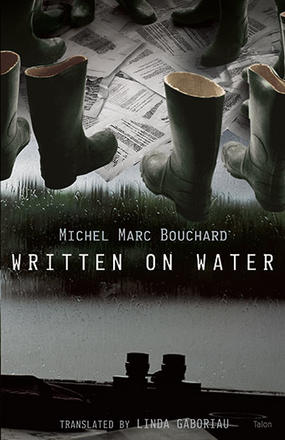 Torrential rains have descended upon a small isolated village, and the overflowing river has washed away everything in its path. The mudslide has gutted the writing room, the place where a group of senior citizens used to meet to record their memories. It was after the exodus ... Read more

Torrential rains have descended upon a small isolated village, and the overflowing river has washed away everything in its path. The mudslide has gutted the writing room, the place where a group of senior citizens used to meet to record their memories. It was after the exodus of their children that they began to commit to paper the events, large and small, that had marked their lives. Now their papers?fragments of life, scraps of memory?are strewn around the countryside, along with the fragments of their community structures, habitations and memorials. To reverse this devastation, they have to put everything back in order, they have to remember, restore and rewrite, while a group of strangers, young volunteers, pull down the physical remains of what is left standing.

But what words can capture their lives? And for whom are they writing? In his determination to save the images of who they were, Samuel, the elderly leader of the group, is blind to the new reality around him. For some of his old companions, the flood represents an opportunity to make an unspoken dream come true; for others, it is an opportunity to confess secret loves, and to talk about the future. Assisted by Danny-the-Lonely-Child, the only child who never left the village, Samuel begins to realize that these fragments can never be restored?they can only be recombined into a narrative as fresh and new and real as the hopes and dreams of their original authors.

“Gaboriau’s extensive experience in translating Québécois drama … enable[s her] to bring out the richness and subtleties of the [French text]. ” — Canadian Literature

?Gaboriau’s extensive experience in translating Québécois drama ? enable[s her] to bring out the richness and subtleties of the [French text]. ”
? Canadian Literature

?This is a witty satire of one of the more tragic effects of globalization: the disregard for collective memory and for those who, like senior citizens, embody it or, like writers, wish to preserve it? Gaboriau has done a superlative job in reproducing the profound disarray underlying the characters’ caustic humour and their violent reactions to differing points of view. ”
? University of Toronto Quarterly