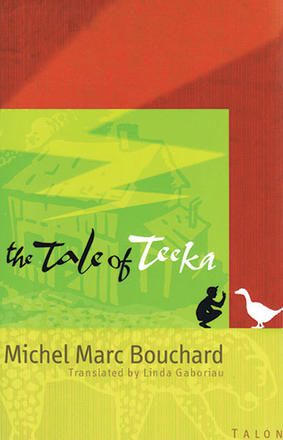 The Tale of Teeka

The Tale of Teeka

Rural Quebec in the fifties. A battered child, Maurice, has taken refuge in a fantasy world. Alone on the farm one afternoon, he invites his pet goose, Teeka, into the house where his bedroom and the bathroom become the scene of some of Tarzan’s most terrifying adventures. ... Read more

Rural Quebec in the fifties. A battered child, Maurice, has taken refuge in a fantasy world. Alone on the farm one afternoon, he invites his pet goose, Teeka, into the house where his bedroom and the bathroom become the scene of some of Tarzan’s most terrifying adventures. His parents unexpected return forces Maurice to commit a desperate and cruel act of violence.

Adapted for television by the playwright and directed by Tim Southam, L’Histoire de l’Oie / The Tale of Teeka was broadcast in French and English on the CBC / Radio Canada National Networks in the spring of 1999. The production won the Banff Television Festival Telefilm Canada Award for Best Canadian English-Language Production.