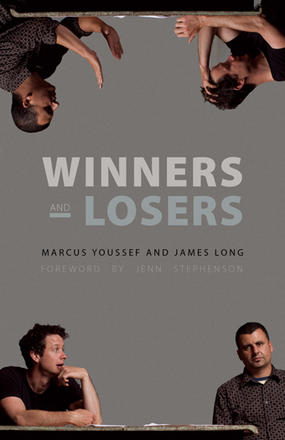 Two buddies, theatre artists and long-time friends Marcus and James, sit at a table and pass the time together playing a made-up game in which they name people, places, or things – Pamela Anderson, microwave ovens, their fathers, Goldman Sachs – and debate whether they are ... Read more

Two buddies, theatre artists and long-time friends Marcus and James, sit at a table and pass the time together playing a made-up game in which they name people, places, or things – Pamela Anderson, microwave ovens, their fathers, Goldman Sachs – and debate whether they are successful or not; in other words, whether they are winners or losers. Each friend seeks to defeat the other, and because one of these men grew up economically privileged, and the other did not, the competition very quickly adds up.

Winners and Losers showcases the work of two giants of the Vancouver indie theatre scene. James Long’s Theatre Replacement develops work specific to particular places and the people who live in them. Marcus Youssef’s Neworld Theatre investigates questions of power, culture, and belonging.

Their first collaborative work is a staged conversation that embraces the ruthless logic of capitalism, and tests its impact on our closest personal relationships as well as our most intimate experiences of self.

“The performances are raw and the lines between reality and stage are completely blurred. The show however, is definitely a Winner” – Fun Fun Vancouver

“Invigorating, hilarious, infuriating, and it may very well have you examining your own friendships and [beliefs]” – Vancouver Presents

"Winners and Losers is the kind of play that makes you want to talk and, better still, to listen. "
– Theater review by Adam Feldman, TimeOut

At the moment, in the independent sector, we've seen the raise of devised, creation-based work. the text for this type of work does not come out of the traditional, playwright working in isolation process. Often the subject of the work is the creators themselves (in a strange hybrid of performance art and reality television). To my mind, the single best work that I've seen come out of this area of exploration has been Winners & Losers by Marcus Youssef and James Long, which is simply amazing and the show I'd suggest anyone to see to understand what's going on in Canada right now.
– Andrew Templeton, New York City World Theatre Day, nycwtd. blogspot. ca/

“Ground-breaking … truth-daring … a fascinating, disturbing, and original experience … It is easy to imagine a second act … If you see this play you will want to talk about it immediately. It’s a winner. ” – BC Bookworld

“Winners and Losers is a loser if you want a traditional, controlled theater experience that doesn’t make you squirm at its awkward, winding vamps and volleys. … [but] Winners and Losers is a winner once it starts to think big. … An ethical high ground is at stake. … the personal becomes intensely political. … victimhood rears its ugly head and the (finally) resonant competition has you leaning in by its pitch-perfect, heavy ending. … What gets in your head are the spot-on depictions, large and small, of people abusing candor and bending the rules in an inescapable race to come out on top. ” – Washington Post

"Winners and Losers looks a lot like open heart surgery. Metaphoric blood is spilled but, strangely, the experience for the audience is exhilarating. The possibility that friendship can survive or even be strengthened by such excruciating honesty is inspirational and opens up floodgates of introspection. ”
– Vancouver Courier

“Winners & Losers provides pleasure and unease … Exploration of the psyches of two very different men teases viewers with insights into themselves … at the heart of the show is the central question of how to be an artist, a man, a father — how to be a person, really — when you are smart enough to recognize your extraordinary privilege but self-aware enough to still feel the pain of your history. … it isn’t always clear which parts are improvised and which are scripted. That tension gives the evening a terrific sense of immediacy and danger. … a funny, fierce, unsettling theatrical experience that refuses to let you go after you’ve left the theatre. ” – Vancouver Sun

"As the gloves come off, the intensity increases. The guiding theory behind the game is that you can’t have two winners sitting next to each other; for there to be a winner, the men reason, there has to be a loser. ”
– Globe and Mail

Other titles by James Long