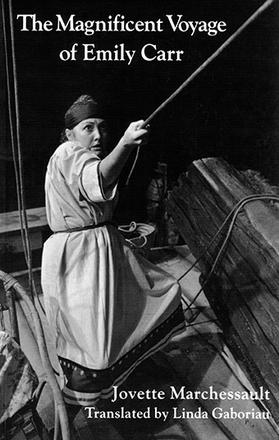 The Magnificent Voyage of Emiy Carr

The Magnificent Voyage of Emiy Carr

Emily Carr lived in a magical place that she had christened The House of All Sorts. In this House which is open to all that is vital on Earth, Emily Carr, with all her greatness and her imperfections, receives visitors from her planet: Lizzie, her sister, is greeted with war ... Read more

Emily Carr lived in a magical place that she had christened The House of All Sorts. In this House which is open to all that is vital on Earth, Emily Carr, with all her greatness and her imperfections, receives visitors from her planet: Lizzie, her sister, is greeted with war whoops and rebuffs, for Lizzie is the adversary, as is all Victorian society; Sophie, her Amerindian friend, who brings messages, reminders and lessons from life; Lawren Harris, her young painter friend from the Group of Seven, who wants to free painting from dogma and revolutionize art in Canada; the Soul Tuner, who hears her cry and vibrates to her thoughts of adoration and compassion . .. and D’Sonoqua, the Goddess-Mother on her phosphorescent pedestal, who beckons to Emily from the old world of legends.

Jovette Marchessault
Born in Montreal, Quebec, Jovette Marchessault is a novelist, a playwright, and a sculptor. She is the winner of the Prix France-Québec, the Grand Prix Littéraire Journal de Montréal, and the Grand Prix Littéraire de la ville de Sherbrooke, and the Governor General’s Award. Like a Child of the Earth (1988), The Magnificent Voyage of Emily Carr (1992), Mother of the Grass (1989), Saga of the Wet Hens (1983) and White Pebbles in the Dark Forests (1990) are available in English translation from Talonbooks.

“A worthy trip home for one of Canada’s greatest painters. ” — Globe & Mail

?A worthy trip home for one of Canada’s greatest painters. ?
? Globe & Mail

Other titles by Jovette Marchessault