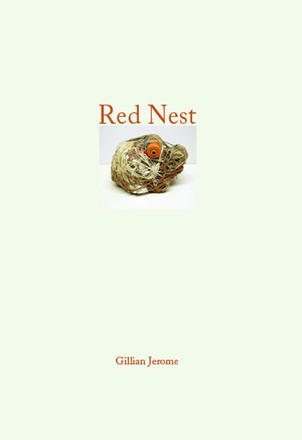 "Red Nest is a deeply political book without the cant. This first book argues passionately for the interconnectedness of all our everyday actions with the larger, political and cosmic forces shaping the destiny of our species. It's got the scope of Whitman, the sensuality of ... Read more

"Red Nest is a deeply political book without the cant. This first book argues passionately for the interconnectedness of all our everyday actions with the larger, political and cosmic forces shaping the destiny of our species. It's got the scope of Whitman, the sensuality of Keats, the ferocity of Kathy Acker and Sylvia Plath. "
—Suzanne Buffam

Enter the surreal adventure that is Gillian Jerome's debut collection of domestic, urban and intergalactic eclogues. Just when you've been ambushed by gods and stars, you're catapulted back into a wild sprawling city filled with cordless phones, coyotes and the hairdos of dandelions. The brave and rambunctious creatures in this book nest in the humour and horror of the 21st-century.

Gillian Jerome is a mother, writer, teacher who lives on the unceded land of the xʷməθkʷəy̓əm(Musqueam), Sḵwx̱wú7mesh (Squamish) and Sel̓íl̓witulh (Tsleil-Waututh) Nations, land and water she is grateful for and responsible to. Her first book of poems, Red Nest (Nightwood Editions, 2009), was nominated for the Dorothy Livesay Poetry Prize and won the 2010 ReLit Award for Poetry. She co-edited an oral history project, Hope in Shadows: Stories and Photographs from Vancouver’s Downtown Eastside (Arsenal Pulp Press, 2008), which won the 2008 City of Vancouver Book Award. Recently her poems have appeared in Hunger Mountain, New Poetry and Geist. Having taught literature at UBC for two decades, she is turning her attention toward teaching language arts to Vancouver teenagers.

She roams easily through both outdoor and urban landscapes, through topics that range from the birth of her child, "Firstborn," to brief, cogent observations on domestic chores. Her observations remind the reader that all things are interconnected.

Red Nest, photographer and teacher Gillian Jerome's first poetry collection, presents a startling combination of myth and gritty realism . .. With a deft turn of phrase, she will combine threat and mockery . .. Yet for all its grime and darkness there is hope here also and by statement and suggestion she helps us to "follow all signs of scattered light" ("The Looking Glass").

Those who enjoyed Jerome's Hope In Shadows collection, a series of non-fiction stories written by residents of the Downtown Eastside about their personal experiences, will be pleased to find that Red Nest includes political references that relate to the poverty that is prevalent in Vancouver. Jerome revealed that "there is a sequence about light that relates to the Downtown Eastside," as well as a "poem called Epilogue for the people [she] worked with on the Hope In Shadows book. "

However, with this book Gillian shared that she wanted to include more universal themes such as "violence, war, poverty, love and domesticity, neighbourhoods and the importance of community. " Jerome writes on these topics using otherworldly imagery, serving as a tool to examine "how the mythological is woven into our daily lives. "

Red Nest is a diffuse book, a loose collection of moments rather than a book with a concrete strategy, but one that builds up a sense of the fecundity of daily experience, and of a cleanness of spirit—a cleanness not in the tidied way of a gleaming kitchen counter, but in the way fresh blood, or old compost, is clean . .. Jerome's touch with her personifications and wordplay is so subtle that her effects are often cumulative, her devices only revealing themselves upon the pleasure of rereading.

Gillian Jerome's poems are a visual feast. One of Jerome's gifts is . .. her ability to spin a poem out into the dream world, even into the surreal, and then know exactly when to reel it back in. A reader could stay on one page of the book for hours at a time. ..

Other titles by Gillian Jerome