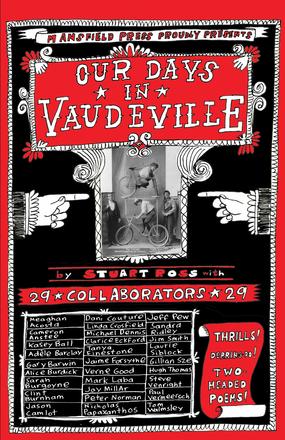 Our Days In Vaudeville

Our Days In Vaudeville

Cobourg poet Stuart Ross believes collaboration allows him to be part of poems Ñ and the kinds of poems Ñ he would never write on his own. He also believes the best poems are ones that explode the author's own intentions. In this book, Ross takes the stage in the vaudeville ... Read more

Cobourg poet Stuart Ross believes collaboration allows him to be part of poems Ñ and the kinds of poems Ñ he would never write on his own. He also believes the best poems are ones that explode the author's own intentions. In this book, Ross takes the stage in the vaudeville act that is collaborative poetry with writers from across Canada. The results are sometimes beautifully harmonic, sometimes chaotically slapstick Ñ but they are always as unpredictable as a live performance. And with the occasional exquisite pratfall. Ross's collaborators include Kasey Ball, Gary Barwin, Alice Burdick, Sarah Burgoyne, Jason Camlot, Michael Dennis, Clarice Eckford, Tanya Finestone, Verne Good, Mark Laba, Jay MillAr, Leigh Nash, Peter Norman, Jim Smith, Gillian Sze, Paul Vermeersch, Tom Walmsley and others.

Alice Burdick is the author of four full-length poetry collections, Simple Master, Flutter, Holler and Book of Short Sentences. Deportment, a book of selected poems, came out in 2018 from Wilfrid Laurier University Press. She has been a judge for various awards, including the bpNichol Chapbook Award and the Latner Writers’ Trust Poetry Prize. She co-owns an independent bookstore in Lunenburg called Lexicon Books and now lives in Mahone Bay, Nova Scotia.

Leigh Nash runs Invisible Publishing, which landed in Picton in 2016 by way of Marmora, Montreal, Halifax, and Toronto. She is the author of Goodbye, Ukulele, and in addition to making books, she is also a tarot card reader.

Other titles by Alice Burdick

Other titles by Leigh Nash