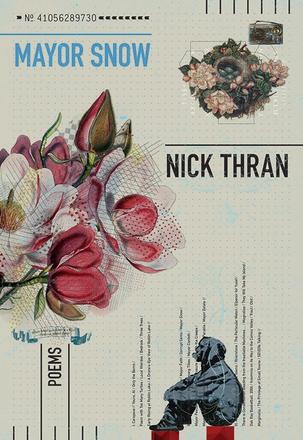 "Thran's poems offer a meditation on the creativity involved in viewing, engaging with its productivity as well as its superfluity, spilling past the edges of what is represented to reflect the ways through which viewers come to imaginatively inhabit what is seen. "
--Michael ... Read more

"Thran's poems offer a meditation on the creativity involved in viewing, engaging with its productivity as well as its superfluity, spilling past the edges of what is represented to reflect the ways through which viewers come to imaginatively inhabit what is seen. "
--Michael Borkent, The Journal of Canadian Poetry

Mayor Snow is about both the abdication and acceptance of responsibilities and inheritance: be they civic, personal, poetic. It begins with speaker-less evocations of corrupt and oppressive political atmospheres and ends with first-person narrative tales of domestic life in Al Purdy's refurbished A-frame. All of these poems work in a shadow, be they forebears, tabloids, cultural markers or government watchdogs.

In the opening and closing sequences, narrative devices act as smokescreens to abstract illustrations of power, with the central sequence reflecting on the subject of dislocation. Parody and paradox are closely intertwined throughout, with the authority of power disrupted through dark humour, unexpected images and the deep resonances existing in apparently innocuous things: a well-worn (and literally "powerless") cabin, a baby daughter, a poem. The question of groundedness, whether literal, literary or familial, explores the terrain between the fearful and the familiar: "Go outside. / Listen to dogs howl. // How do we live / without power?"

Nick Thran is the author of three collections of poems. His second collection, Earworm (Nightwood Editions, 2011), won the Trillium Book Award for Poetry. After stops in New York, Calgary, Madrid and Montreal, he now lives in Fredericton, NB, on the unceded and unsurrendered territory of the Wolastoqivik, where, in addition to writing, he works part-time as an editor and bookseller.

". ..Nick Thran, in his third volume of poetry Mayor Snow, pushes on in the wake of loss to ask what it might mean to survive and inherit the past. In Mayor Snow, Thran assembles an eclectic, playful, and bold selection of poems. .."
~Kyle Kinaschuk, Canadian Literature issue 226, Autumn 2015

Other titles by Nick Thran