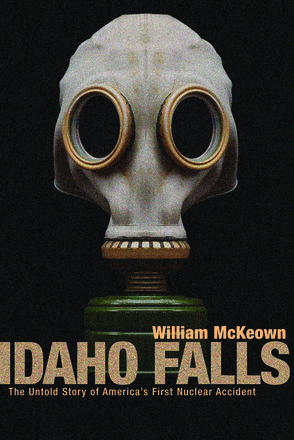 Before the Three Mile Island incident or the Chernobyl disaster, the world’s first nuclear reactor meltdown to claim lives happened on U. S. soil. ... Read more

Before the Three Mile Island incident or the Chernobyl disaster, the world’s first nuclear reactor meltdown to claim lives happened on U. S. soil. Chronicled here for the first time is the strange tale of SL-1, an experimental military reactor located in Idaho’s Lost River Desert that exploded on the night of January 3, 1961, killing the three crewmembers on duty.

Through exclusive interviews with the victims’ families and friends, firsthand accounts from rescue workers and nuclear industry insiders, and extensive research into official documents, journalist William McKeown probes the many questions surrounding this devastating blast that have gone unanswered for decades.

From reports of faulty design and mismanagement to incompetent personnel and even rumors of sabotage after a failed love affair, these plausible explanations raise startling new questions about whether the truth was deliberately suppressed to protect the nuclear energy industry.

William McKeown is a newspaper reporter and editor living in Colorado Springs, Colorado.

It’s hard to say when it all went to hell.

The mug shots of Jack Byrnes and Dick Legg taken at the beginning of their last military assignments betray no hint of the elemental forces that would soon engulf them. Missing from the muddy black-and-white photographs is evidence of the reckless passions and base instincts of two saboteurs—or, conversely, the bewildered innocence of a couple of patsies— that would make them the main players in one of the most mysterious human dramas in industrial history. Sure, if you search their faces for telltale signs of character, you might glimpse something intense and smoldering in the deep-set eyes of Jack Byrnes; you might detect a slight, smug smile on the squarish face of Dick Legg. But that’s just mental rubbernecking. It’s been more than four decades since the photographs were snapped, and they don’t offer up much besides a musty smell and a record of bad haircuts. There’s no indication the two weren’t destined for long lives and ordinary deaths.

The passage of years and the death and silence of friends and family have left but the bleached bones of the two men’s histories. They left no diaries, no record of notable achievements, and few anecdotes to hint at the mix of characteristics that made up their personalities. When they arrived in 1959 in Idaho’s fertile Snake River Valley to take up what would be their final posts, Byrnes and Legg were still unformed, still works-in-progress, their individual potentials and futures as fuzzy as their service photographs. They were typical American boys on the cusp of manhood, at that age when character, talent, and limitations are just beginning to emerge. Born in the late 1930s in quiet American towns, the two played soldiers while real ones marched across Europe in World War II. As teens, they saw a great explosion in American power as those soldiers came home and rebuilt their country on the GI Bill, a package of government benefits that allowed soldiers to buy houses and attend college. Byrnes and Legg were young men of their time, schooled in the buoyant hopes of prosperity and order, confident that progress would give them better lives than their fathers, agitated by the sense of change and possibility that was sweeping America at the cusp of the 1960s.

The new god that emerged after World War II—the tripartite deity of industry, science, and technology—promised to make all these things possible, even for those of modest means and education. It was the atomic age, when Americans decided they had the knowledge, right, and wisdom to harness for other uses the terrible power released upon Hiroshima and Nagasaki. The atom had ended the war, smote the enemy. But surely its power could be tamed, used to power boats and planes, deliver unlimited electricity, revolutionize medicine. Atomic energy, America’s leaders promised, would checkmate America’s enemies while it bestowed on all others the gift of limitless energy. It was a seductive idea—using nondescript uranium ore to transform the world.

By the time Jack Byrnes and Dick Legg peered at the lens of a military camera, they had bought into this atomic-powered version of the American Dream. They were determined young men in a hurry, hungry for the good things in life, cocksure about their abilities and opportunities. For them and thousands of others, there was no better place to find the new America than at the National Reactor Testing Station, located on the vast expanse of sagebrush in Idaho’s Lost River Desert. Established in 1949, the classified site lay just west of the Snake River Valley and was a monument to the golden age of nuclear science. It was a place where American men fearlessly played with the atom. When Byrnes and Legg arrived, almost two dozen nuclear reactors dotted the desert floor, prototypes of machines that would revolutionize propulsion and energy—and life. Government-issued films of the time celebrated the “new hope of the atomic era” and hinted at the blessings it would afford. Standing before models of prosperous and gleaming cities, film narrators—invariably white men in crew cuts and black suits—championed the glorious changes nuclear power would introduce to the arts, humanities, and sciences. An article in a 1958 issue of National Geographic concludes that “abundant energy released from the hearts of atoms promises a vastly different and better tomorrow for all mankind. ”

There were a few people who had doubts about the message. Ranchers and sheepherders in the American West were starting to voice concern about radioactive fallout from the nuclear weapons testing then being conducted in the Nevada desert, fallout that had made its way north to the Lost River Desert. Some experts and interest groups were raising questions about storing radioactive materials and locating nuclear plants near large cities. There were even some who scoffed at the rosy nuclear future portrayed in publications and documentaries at the time. But generally, the American people— and the folks in Idaho—believed the benefits of atomic energy outweighed the dangers it posed. For Byrnes and Legg, the lure of the atom had little to do with the promises and peril it posed to mankind. For them, it meant a paycheck and it meant a brighter personal future. They joined a select group of young engineers, construction workers, soldiers, and scientists flooding the wilds of Idaho to turn nuclear dreams into reality.

Then carne January 3, 1961, a day that foreshadowed the dimming of the atomic dream, even if it remains a curiously obscure date to all but a few nuclear insiders. That afternoon, Byrnes arrived at a small experimental army nuclear reactor for his shift with Legg and a trainee, Richard McKinley. The three were scheduled to perform routine maintenance work. Nothing suggested that it would be anything other than an ordinary night.

But just a few short hours later, the ordinary became extraordinary. The events that unfolded in the crude silo of Stationary Low-Power Unit 1 on that January night would spawn more than four decades of scandalous rumors and speculation in the closed world of the nuclear industry. That one cataclysmic night would underscore the fragile line between the fallibility of man and the complexity of an intricate science. It would also reveal, but only much later, how a government shaped by a pervasive Cold War mentality would protect the then-fledging nuclear industry from public scrutiny.

While there were markers on the road leading to the chaos and calamity of that night—men with increasingly tumultuous personal affairs and a reactor with malfunctioning equipment—it was impossible to predict how these elements would collide in such a mysterious, unprecedented manner. Despite a nuclear testing facility that housed highly sensitive, top-secret equipment and some of the brightest minds of that generation, there was no way to measure, test, or imagine what would happen in the frigid southeastern Idaho desert on that January night. There was no way to predict the disaster.