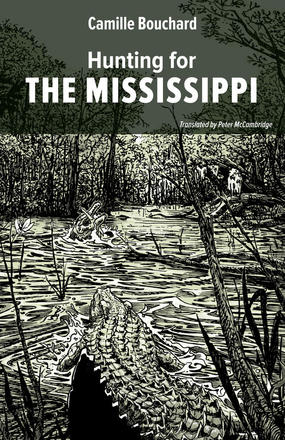 Hunting for the Mississippi

Hunting for the Mississippi

The year is 1684. Twelve-year-old Eustache Bréman leaves behind a life of misery begging on the streets of France for a second chance in the New World with his mom, his sweetheart Marie-Élisabeth, and Marie-Élisabeth's family. But life is tough, with plenty more tragedy and ... Read more

The year is 1684. Twelve-year-old Eustache Bréman leaves behind a life of misery begging on the streets of France for a second chance in the New World with his mom, his sweetheart Marie-Élisabeth, and Marie-Élisabeth's family. But life is tough, with plenty more tragedy and disappointment to come on De La Salle's ill-fated expedition to the Mississippi. Join Eustache as he comes of age in Louisiana, all in a sparkling English translation that's every bit as modern and playful as Camille Bouchard's original French.

"Told in the voice of Eustache, and based on historical records, this gripping fictional coming-of-age story reveals the violence and horrors of the voyage and the lusts and pride of the men who fought to survive in a strange new land. (Rated 5 Hearts)" —Kristine Morris, Foreword Reviews

"Bouchard has combed the research and offers a fresh take on what happened to De La Salle’s expedition. In Hunting for the Mississippi, the author weaves an exciting tale based largely on true events. He brings 17th-century America alive with vivid detail and colourful characters in this fast-paced adventure story that will entertain readers of all ages. " —John Spychka, lifeinquebec. com

"The voyage scenes introduce readers to (real-life) characters who were at odds with La Salle and his associates. Several resented his privileged social status. Eustache and his family and friends are loyal to their leader, and Eustache is thrilled to become one of his messenger boys. The men who later kill La Salle and his nephew are depicted as surly thugs . . . . Camille Bouchard is a master of the cliff-hanger chapter ending . . . . a sophisticated, compelling novel. Recommended. " —Ruth Latta, CM Volume XX11 Number 35, unmanitoba. ca