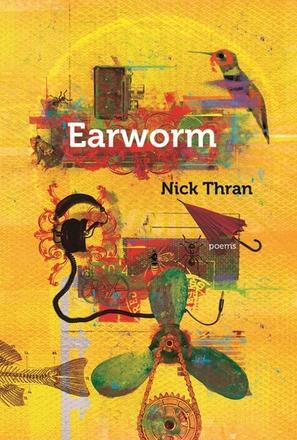 Earworm, the second book from acclaimed poet Nick Thran, expertly combines wicked cleverness, adept craftsmanship and a uniquely insightful perspective in an entertaining yet substantial tour de force. Building on the success of his debut, Thran has enhanced his compelling pop ... Read more

This eclectic collection takes in topics ranging from cartoons to Caravaggio to cicadas, expressed in a comparable variety of poetic forms. Despite this diversity, the book is unified by its perfectly balanced blend of thoughtful observation laced with Thran's characteristically whimsical sense of humour.

Earworm is also interspersed with several poems inspired by works of art in a variety of media. Whether he's reinterpreting Picasso's Blue Period, encapsulating a moment from The True Adventures of the Rolling Stones, or lending a narrative to one of Dennis Oppenheim's conceptual sculptures, Thran is able to distill the essence of the original while adding a fresh twist.

Nick Thran's previous collection of poems, Earworm (Nightwood Editions, 2011), won the Trillium Book Award for Poetry. His first collection, Every Inadequate Name (Insomniac Press, 2006), was a finalist for the Gerald Lampert Memorial Award. Born in Prince George, BC, Nick has lived and worked in various towns and cities across the country. He currently works as a poetry editor, and lives with his wife and daughter in Montreal.

...Thran demonstrates how high and low can be perfect bedfellows with a wise technician working behind the scenes. I have my fingers crossed that the author follows this fruitful path in future collections, mining the collisions that occur across the strata of culture.
--Spencer Gordon, Maple Tree Literary Supplement

I submit to the fair-minded reader that coolness . .. has never really been a going concern for Canadian poets. In recent years, there have been a modest clutch . .. who really pull it off. Nick Thran is one of them. His poems are cool. Genuinely, impossibly cool.
--Michael Lista, a href= http://arts. nationalpost. com/2011/04/22/michael-lista-on-poetry-being-effortlessly-cool-vs-being-the-next-al-purdy/#more-31489>National Post

Slowly asserting itself in Thran's work and demeanour is an assured moral compass that makes him, above all, feel uniquely genuine.
--Jeff Latosik, Open Book: Toronto author blogs

Other titles by Nick Thran