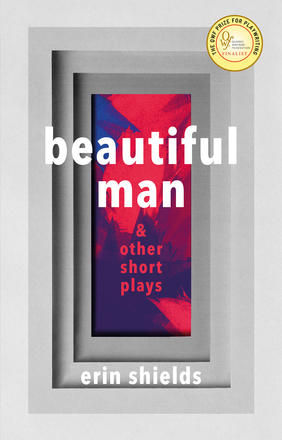 Award-winning playwright Erin Shields has crafted three thought-provoking plays that centre on the inner lives of women, offering space for those who dare to listen.

An eviscerating satire of gender roles in popular culture, Beautiful Man imagines a world in which women are the ... Read more

Award-winning playwright Erin Shields has crafted three thought-provoking plays that centre on the inner lives of women, offering space for those who dare to listen.

An eviscerating satire of gender roles in popular culture, Beautiful Man imagines a world in which women are the subjects and men the objects. As three women dissect the latest Hollywood blockbuster, narrative after narrative of strong female characters fold into each other, fusing into a brutally recognizable story.

In Unit B-1717, a woman is trying to clean out her storage locker and say goodbye to the past, but an overwhelming feeling of dread forces her to confront the way she has historically subjugated herself to the needs of others.

In And then there was you, a mother addresses her child as they both visit milestones that offered them each independence, and in the process explores how the profound connection between mother and child evolves.

Erin Shields is a Montreal-based playwright. Her adaptation of Paradise Lost premiered at the Stratford Festival and won the Quebec Writers’ Federation Playwriting Prize, and her play If We Were Birds, which premiered at Tarragon Theatre, won the 2011 Governor General’s Literary Award. Other theatre credits include Jane Eyre (Citadel Theatre), Piaf/Dietrich (Mirvish Productions/Segal Centre), The Lady from the Sea (Shaw Festival), The Millennial Malcontent and Soliciting Temptation (Tarragon Theatre) and Instant (Geordie Theatre). Upcoming projects include Queen Goneril for Soulpepper and Ransacking Troy for the Stratford Festival.

Andrea Donaldson has directed award-winning productions for theatres across Canada, including Soulpepper, Factory Theatre, Tarragon Theatre, Theatre Passe Muraille, Theatre Direct, the Great Canadian Theatre Company, the Festival Players of Prince Edward County, the National Theatre School, SummerWorks, the St. Lawrence Shakespeare Festival, Shakespeare in the Ruff, Espace René-Provost, the Toronto Fringe, Red Sky Performance, and Nightwood Theatre. For two decades Donaldson has played a pivotal role in fostering new feminist works for the stage as a freelance director/dramaturge, in her role as Tarragon’s Associate Artistic Director, and at Nightwood Theatre as Program Director of Write from the Hip and now as Artistic Director.

“A brilliant, brutal reminder of the realities of being a woman in a society that values beauty and compliance. ”

“There’s a great deal of rage underlying [Beautiful Man], but also many humorous elements, and so many things to admire about Shields’s acute observations and inversions of expectation .  .  . Every new play from her is a challenge, and a treat. ”

Other titles by Erin Shields