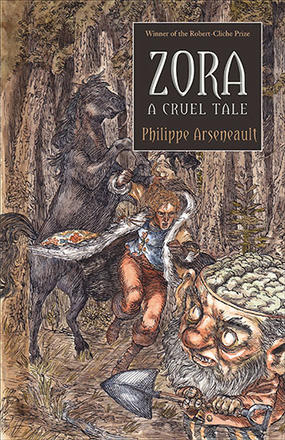 By Philippe Arseneault
Translated by Fred A. Reed & David Homel

Arsenault’s Rabelaisian fantasy is a gothic tale of the macabre and the bizarre, of black magicians and alchemists, and of the life and times of Zora Marjanna Lavanko, the daughter of a brutish tripe-dresser who dies for love. This surreal novel is set in the murky fictional ... Read more

Arsenault’s Rabelaisian fantasy is a gothic tale of the macabre and the bizarre, of black magicians and alchemists, and of the life and times of Zora Marjanna Lavanko, the daughter of a brutish tripe-dresser who dies for love. This surreal novel is set in the murky fictional domain of the Fredavian Forest, in the very real province of Karelia, then a part of the Grand Duchy of Finland, in the closing years of the nineteenth century.

Many years of work brought forth this finely rendered fantasy. While some readers might be put off by the cruelty, violence, and mayhem of text, those who persist will be rewarded with black humour and the fine display of a full range of human emotion. Rabelaisan certainly, but Zora is also inspired by the legends of the ancient Finns as well as other epic literary fantasies.

The English reader will feel the text, deftly translated by Fred A. Reed and David Homel, carries overtones of Mervyn Peake. Despite this ornate style, the narrative has surprising pace, perhaps because the reader is busy trying to keep his or her jaw from hanging open.

The original French novel won the 2013 Robert-Cliche Prize, awarded to an author for a first novel (and not a first work).

"Welcome to the far reaches of 19th century Finland. Welcome to “a forest peopled with strange and very ugly creatures known as fredouilles.” Welcome to the Inn of the Farting Bear, where the scum of the earth and the dregs of society like to meet up for prostitution, under-the-table abortions, and widespread wickedness. But you are not welcome. This is not a welcoming place. The impressively named innkeeper Seppo Petteri Lavanko has not rolled out the welcome mat. Beware. Be careful. Run!" —Peter McCambridge, Quebec Reads

Praise for the French novel
"This book is a masterpiece, an immense pleasure in reading, and the highly worked, mastered work of a real writer. One enters in order not to leave, one takes delight of the gluttony, the violence, and the humour that mark each page".
—Colette Lens, jury member, Robert-Cliche Prize

“Anima’s a novel that seeks to touch your soul. And it does: it is dramatic, intense, dark. Wajdi Mouawad explores the land of his character’s feelings, as well as his own, which is extreme and complex, just as all his literature is. Human limits, such as cruelty and violence, are some of the axis of his work, developed in a very particular and poetic style throughout all his work. A very special and intense author who has many ingredients [and could] end up becoming, [at] some point, a classic.”
—Iridescence Mag

"Each of these animals and insects is given characterization and a particular voice as narrator, which builds a complex, multifaceted story full of terse language taking readers on a journey from Montreal to New Mexico."
—World Literature Today

“Nature may be red in tooth and claw, but in Wajdi Mouawad’s outstanding novel, Anima, it’s humans who are claw-deep in red and animals who benignly observe. … On one level, the book is a classic murder mystery; on a deeper level, it echoes humanity at its most primal. The animals who tell the tale soar above all, overlaying the harsh, monochrome world of humans with glimpses of a richer world, wonderful in its variety but heartbreakingly beyond our perception. … Startling, inventive, and beautifully crafted, Animaconveys small themes as well as large ones, and does so in a beguiling framework that effectively balances the story’s underlying savagery.”
—Foreword Reviews