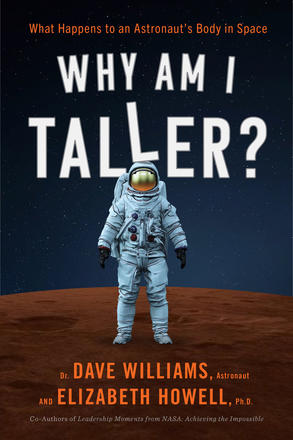 Why Am I Taller?

Why Am I Taller?

What happens in space that causes the body to change? Learn about life in space from astronauts

Is the human body built for Mars? NASA’s studies on the International Space Station show we need to fix a few things before sending people to the Red Planet. Astronauts go into ... Read more

What happens in space that causes the body to change? Learn about life in space from astronauts

Is the human body built for Mars? NASA’s studies on the International Space Station show we need to fix a few things before sending people to the Red Planet. Astronauts go into space with good vision and come back needing eyeglasses. Cognition and DNA expression could be affected for years. And then there’s the discomfort of living in a tight space with crewmates, depression, and separation from the people you love.

Space doctors are on the case. You’ll meet the first twin to spend a year in space, the woman who racked up three physically challenging spacewalks in between 320 days of confinement, and the cosmonaut who was temporarily stranded on space station Mir while the Soviet Union broke up underneath him. What are we learning about the human body?

As astronauts target moon missions and eventual landings on Mars, one of the major questions is how the human body will behave in “partial gravity. ” How does the human body change on another world, as opposed to floating freely in microgravity? What can studies on Earth and in space tell us about planetary exploration? These questions will be important to the future of space exploration and to related studies of seniors and people with reduced mobility on Earth.

What do horses, guitarists and astronauts have in common? The question sounds more like the beginning of a joke told over a round of drinks than an important issue in space medicine. In fact, it’s a question that NASA flight surgeons asked when trying to solve the problem of spacewalker’s nails — otherwise known as fingernail delamination, associated with repetitive finger stress working in a spacesuit.

Many astronauts use nail hardener to strengthen their nails, and anecdotal observations suggest that Hard as Hoof nail strengthening cream works well. The benefit of using topical equine products for humans is gaining popularity; in fact, some are convinced the best nail cream for brittle nails is Healthy Hoof cream, meant for horses. With hooves and fingernails both made from keratin, it is not a surprise that what works for a horse might help a human! If nothing else, it will make for an interesting conversation in the lunar habitat when one of the astronauts puts it on before a spacewalk.

Some feel that one of the benefits of space travel is that corns and calluses are no longer a bother in the absence of gravity. The characteristic hard, thick areas of skin can form anywhere on the body but occur most often in areas of frequent friction, irritation or pressure — typically the weight-bearing part of the foot, or on the heel or toes if shoes are particularly tight. Floating around in a space station sounds like a perfect solution. No shoes are needed unless you’re running on the treadmill or cycling on the exercise bike. Otherwise, astronauts wear white socks. Sounds like blissful relief!

But calluses can form in space, though they are found on the top of the feet rather than the bottom or heel. While it is possible to float in a specific location in microgravity, for some tasks astronauts tuck their forefoot into restraining loops to stop themselves from floating away. Contact with the foot loop results in a point of friction on the top of the foot that over time may result in the formation of a callus.

Returning to Earth, astronauts find that the soles of their feet are smooth, while the tops are thick and callused like the soles were before the mission. This can be very uncomfortable when they start to wear shoes again, but over a couple of months the change in friction and weight-bearing shifts the areas of skin thickening back to the soles of their feet. Calluses can also build up on astronauts’ hands when they are in space. It’s easy for them to move about the space station by pulling themselves hand over hand, gliding gracefully between handholds, but using their hands so much for propulsion means that their skin thickens there instead of on their feet.

“The authors’ down-to-earth explanations and vivid descriptions are a treat, and especially enlightening are Williams’s first-person accounts of being in space … This candid survey will delight armchair astronauts. ” — Publishers Weekly

“Anecdotes from space flights and astronauts augment Williams’s firsthand experience, including Neil Armstrong’s experiences with Gemini 8 and from recent stents on the International Space Station. These research findings are intriguing and accessible, vivified by an undercurrent of energy and excitement. Why Am I Taller? is a fascinating science text about the effects of space travel on the human body. ” — Foreword Reviews

“Why Am I Taller? is a comprehensive and contemporary romp through the clinical challenges of past and future space flight. It is the kind of book that results when two gifted authors merge their respective talents to bring otherworldly medical discoveries down to earth with insight and clarity. Williams and Howell’s fascination for matters of physiology, physics and future frontiers is clearly evident and serves to impart a sense of wonder throughout the book. ” ­­— Robert Thirsk, former Canadian Space Agency astronaut

“Williams and Howell write simply and engagingly, never getting bogged up in excessively dry details and maintaining accessibility of the material throughout. And they sprinkle enough humor to hit the sweet spot and make it very enjoyable. ” — books are life blog

Other titles by Dr. Dave Williams