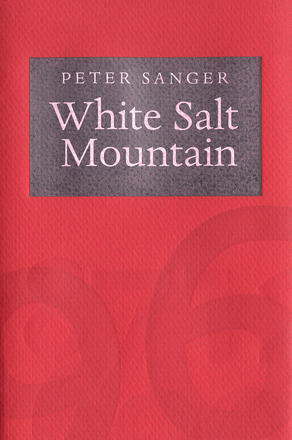 In this remarkable follow-up to Spar: Words in Place (Gaspereau Press, 2002), Peter Sanger explores the scope of words in time. Offering significant new material to the study of linguist Silas Rand and poet John Thompson, Sanger introduces Susan Barss and Florence Ayscough, notable but largely unsung contributors to Rand’s and Thompson’s work. With the same passion for reading and exploration, along with several of the neighbourhood landmarks, symbolic imagery and literary influences that first emerged in Spar, Sanger joins the lives and work of key authors and translators in Canada’s literary history. Sanger’s unique and far-sighted approach to words and time illuminates critical intersections between authors, readers and texts.

“White Salt Mountain is a mystery,” says Sanger. “The consistent theme of the book is the source and meaning, at the most profound levels, of its title. This book fits into the literary category also occupied by Poe’s ‘Gold Bug’ story and more recently by A. S. Byatt’s Possession about the detection of the real life of a Victorian poetess and the parallel life lived by the modern detective literary scholars. . . . The reader of White Salt Mountain participates not only in the detection of a phrase but also in discovering Florence Ayscough and Susan Barss, discovering certain feminine continuities in Canadian cultural history which had been lost. . . . At base, White Salt Mountain is structured according to the most ancient of narrative formsthe quest for hidden and lost treasure. Its Shangri-la is St. Andrew’sits Treasure Island rests in the Bay of Fundy”

On a journey to MacMaster Island in Passamaquoddy Bay, New Brunswick, Sanger introduces the work of nineteenth-century translator and poet Florence Ayscough. He provides the first comprehensive account of Ayscough’s life, including her years in Shanghai, her study of Chinese, her collaboration with American poet Amy Lowell on translations of Chinese poetry, and the influence of these translations and others on the Canadian poetic idiom that persists today.

Sanger’s work illustrates the power words carry across time beyond their volumes. In his discussion of New Brunswick poet John Thompson’s Stilt Jack, a collection that continues as one of the most widely influential works in Canadian poetry, Sanger works from inside and outside of Thompson’s words, bringing to life the poet’s guiding mythology and influences, and testing them in transit and in conversation with other texts.

Sanger’s final chapter begins in a canoe on the Shubenacadie River as he sets out to locate ‘Grandmother’s Place’, described in Silas Rand’s Legends of the Micmacs. Sanger also presents his recent discovery of Rand’s original transcripts of two stories told by Susan Barss in 1847, among the earliest surviving records of Native storytelling in North America. Sanger’s sleuthing, and the kinds of parallels and intersections it brings to light, embodies a departure from the conventions of literary criticism into a style of reading that is grounded in locale and attuned to the way a literary culture takes shape over time.

Peter Sanger has published five collections of poetry, including Earth Moth (1991) and Ironworks (2001), a collaborative project with photographer Thaddeus Holownia. His most recent work is Spar: Words in Place (2002), a collection of essays based on life in rural Nova Scotia. Sanger has been the poetry editor of The Antigonish Review since 1985. He lives on a farm in South Maitland, Nova Scotia.

The trade edition of this book is a 5 x 8-inch, smyth-sewn paperback bound in card stock with a letterpress-printed jacket. The text is printed offset on laid paper.