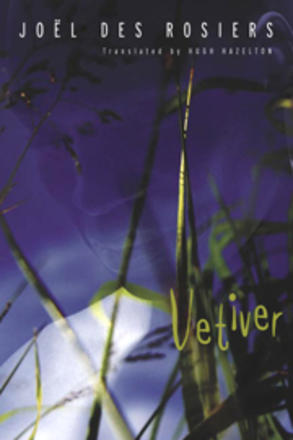 Joël Des Rosiers is an acclaimed Haitian-born francophone writer whose work has been nominated for the Governor General's Award and whose life reads like a novel — he is a psychiatrist, an award-winning poet and a political activist on the international stage. His poetry ... Read more

Joël Des Rosiers is an acclaimed Haitian-born francophone writer whose work has been nominated for the Governor General's Award and whose life reads like a novel — he is a psychiatrist, an award-winning poet and a political activist on the international stage. His poetry collection Vetiver, which won the 1999 Grand Prix du livre de Montréal and the 2000 Grand Prix du Festival international de la poésie de Trois Rivières, is now published for the first time in English. Vetiver, a grass also known as cuscus, was brought from the Indies to Haiti. There it has taken root and flourished, becoming all-pervasive. The heavy aroma of the grass permeates everything. In Vetiver, the grass is a powerful, mythical symbol for Joël Des Rosiers, representing the root of lyrical possibility. An homage to his native land, Des Rosiers' narrative poem evokes all of the wild opulence of the Caribbean world and plumbs the depths of memory in language that is rich and multihued, full of tangible flavours. It is a hymn to the power of the word, the book and the voice, guided by the heritage of ancestors and the sensual proximity of people and things. Des Rosiers revisits themes from his three previous collections here: nostalgia, the search for roots and identity, the pain of memory, and the exploration of real and imagined spaces. Rooted in mystery and sacrifice, these narrative poems are shaped by extreme tensions that blend, in a strange way, with a seemingly clinical erudition where the melancholy of the flesh offers itself up as a substitution for mourning, religious ceremony and sensuality.

Other titles by Hugh Hazelton