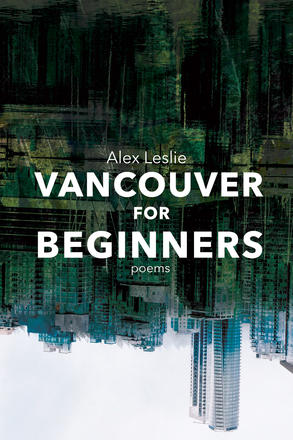 In Vancouver for Beginners, the nostalgia of place is dissected through the mapping of a city where readers are led past surrealist development proposals, post-apocalyptic postcards, childhood ... Read more

In Vancouver for Beginners, the nostalgia of place is dissected through the mapping of a city where readers are led past surrealist development proposals, post-apocalyptic postcards, childhood landmarks long gone and a developer who paces at the city's edge, shoring it up with aquariums.

In these poems you will traverse a city lined with rivers, not streets. Memory traps and tourist traps reveal themselves, and the ocean glints, elusive, in the background. Here there are many Vancouvers and no Vancouver, a city meant for elsewhere after the flood has swept through. This place of the living and the dead has been rewritten: forests are subsumed by parks, buildings sink and morph, and the climate has changed.

Vancouver for Beginners is a ghost story, an elegy, a love song for a city that is both indecipherable and a microcosm of a world on fire.

"Alex Leslie is a tremendously gifted and compassionate writer. This bold and searing collection is a wonder. " —Madeleine Thien, Scotiabank Giller Prize winning author of Do Not Say We Have Nothing

"A magnetic collection that must be read over and over. " —Kirkus Reviews

Alex Leslie has published a collection of stories, People Who Disappear (Freehand, 2012), shortlisted for a 2013 Lambda Award and a 2013 Relit Award, and a chapbook of microfictions, 20 Objects for the New World (Freehand, 2011). Alex's writing has won a Gold National Magazine Award for personal journalism and a CBC Literary Award for fiction and was shortlisted for the 2014 Robert Kroetsch Award for innovative poetry. Recent projects include editing the Queer issue of Poetry Is Dead magazine, which brought together different approaches to Queer poetics from across Canada. Website:
alexleslie.wordpress.com.

Other titles by Alex Leslie