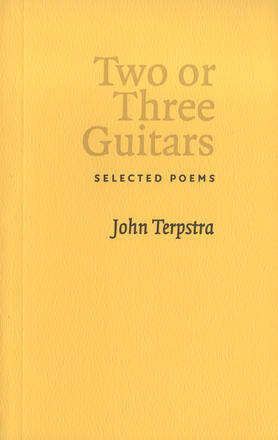 Since the emergence of his first collection in 1982, John Terpstra has gained recognition as a poet of great precision, compassion and attentiveness. With a fascination for geology, family, heritage, community and faith, he has trained his eye variously on his Hamilton neighbourhood, ... Read more

Since the emergence of his first collection in 1982, John Terpstra has gained recognition as a poet of great precision, compassion and attentiveness. With a fascination for geology, family, heritage, community and faith, he has trained his eye variously on his Hamilton neighbourhood, his Dutch background, the joys and peculiarities of marriage and parenting, as well as on issues of environmental degradation, local economy, security, society and questions of hope. This collection brings together highlights from each of Terpstra’s full-length publications, from Scrabbling for Repose (1982) to Disarmament (2003).

Says Terpstra, “Many of these poems have fallen off the literary wagon, so to speak, by being in books that are now out of print. But I return to them when I give readings. It’s gratifying, and a bit surprising, to read a poem written twenty-five years ago and feel no disjunction between it and a more recent poem. It encourages a sense of time that is non-linear. I’m all for non-linear time. And I see from this selection that what consistently sparks my imagination is all those intersections between people and their natural environment, in the city or with each other in community, family or marriage, or with the natural environment itself. Or, all of them together. Oh, and God. Can’t forget God. He, she or it is in there too, like a dirty shirt. I’ve often wondered what connection exists between the carpentry and woodworking that I have done for a living almost as long as I have been writing (freely), and the writing itself. I think that the two together simply identify me as one in the species homo faber, i. e., one-who-makes. In my case, this is a subspecies of homo ludens, one-who-plays. ”

Terpstra’s poetry has always posited a candid, congenial mix of whimsy and contemplation; an extended project of giving history, and institutions like the future and the church, a place in the everyday. With a concern for the specifics of experience, and particularly shared experience, he possesses a remarkable talent for synthesizing the accumulation that lurks behind every interaction.

Among these selections is the full text of Captain Kintail, the long poem that won Terpstra the CBC Literary Competition in 1991. With snatches of conversation, crisis and song, the poem tells the story of a weekend spent in the company of other families at a camp on Lake Huron, the co-mingling of age groups, and the revelry and tension of group endeavours. Inside are some of the early percolations of the poet’s more recent ruminations on faith, family and the geography of the congregation. Two or Three Guitars also brings back into print selections from The Church Not Made With Hands, Devil’s Punchbowl and Forty Days & Forty Nights, with poems like “Atonement,” “The Little Towns of Bethlehem” and “Recordings” that demonstrate Terpstra’s roving interpretations of history and place, his continued interest in storytelling and in the location of the mythic in the here and now.

Since the early 1980s, John Terpstra has been a mainstay of the Canadian literary scene, publishing both poetry and non-fiction. He has also been a finalist for the Governor General’s Literary Award and the Charles Taylor Prize. He lives in Hamilton, Ontario, where he works as a writer, cabinetmaker and carpenter.