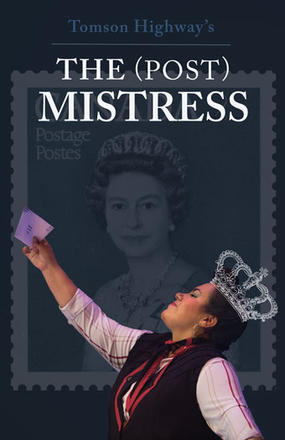 Canada’s most famous Aboriginal playwright, Tomson Highway, sets his latest theatrical achievement, The (Post) Mistress, in a not-so-distant past, when sending letters through the mail was still vital to communicating with friends and loved ones, and the small-town post office ... Read more

Canada’s most famous Aboriginal playwright, Tomson Highway, sets his latest theatrical achievement, The (Post) Mistress, in a not-so-distant past, when sending letters through the mail was still vital to communicating with friends and loved ones, and the small-town post office was often the only connection to faraway places longed-for or imagined.

Born and raised in Lovely, Ontario, a small French-Canadian farming village near Lake Huron, Marie-Louise Painchaud has never had occasion to venture much farther than the nearest community – Complexity, a copper-mining town and a somewhat larger dot on the map of the Georgia Bay area. For thirty years, Marie-Louise has worked at the local post office, and, through the many letters she sorts when they arrive and the ones that she stamps before they go out, she has come to know the lives of everyone in town and vicariously experience their various loves, losses, and personal dramas.

In this one-woman musical tour de force, Marie-Louise confides in us the interwoven stories sealed in the envelopes she handles every day. A samba beat offers the soundtrack for the tale of a local woman’s passion- ate but doomed affair with a man from Rio de Janeiro; a rhythmic tango plays as Marie-Louise divulges a friend’s steamy tryst in Argentina. All together, twelve unique musical pieces, ranging from Berlin cabaret to French café chanson to smooth bossa nova, accompany a multilingual French, Cree, and English libretto.

In The (Post) Mistress, Tomson Highway creates not only a rural comedy but also a sublime parody of small-town life – the northern Ontario version of Thornton Wilder’s Our Town or Stephen Leacock’s Sunshine Sketches of a Little Town.

Music from The (Post) Mistress is available at http://goo. gl/ivtwqA

"Thanks to Highway’s accomplished writing, the tender, sad and disturbing moments are as effective as the comedy. The dramatic arc is subtle … but this is definitely a play more than a succession of songs. ”
– Saskatoon Star-Phoenix

“Tomson Highway is a celebrated writer and an icon in the indigenous community. This Cree writer from northern Manitoba has written numerous plays, a novel and several children’s books. But Highway is also a master pianist, musician and songwriter. His latest offering is called The (Post) Mistress, a musical one-woman play. The multi-genre soundtrack includes songs in Cree, English and French — and, like Tomson, it defies category. Tomson Highway will be playing his grand piano on the Indigenous Music Awards (IMA) stage this year [2015], in what is sure to be an unforgettable performance. ”
– CBC

“The choice to set the play in Francophone Canada is reminiscent of one of Highway’s main inspirations, Michel Tremblay’s Les Belles-Soeurs. The libretto is trilingual: in English, (glossed) French, and (glossed) Cree with some words of Spanish. … the self-aware exoticism of the play and the colourfulness of its characters (reminiscent of those from The Rez Sisters) should not make one forget its dark overtones as a tragicomedy: separation, death, and abuse are omnipresent … [the play features] endearing, memorable characters [and focuses] on métissage and love. … [It offers] compelling insights into what it means to be Canadian in today’s multicultural society and into the varied possibilities of Canadian theatre. ”
– Canadian Literature

“Highway cut his teeth by writing work that mixed the spirit of his first language, Cree – the “trickster language,” he calls it – with topics like AIDS, sexual abuse, poverty and racism in native communities. The result is a kind of magical realism which expresses the universal aspects of his stories, much in the same manner a Shakespeare play can be understood without a firm handle on the language. ”
– Maclean’s Magazine

Other titles by Tomson Highway