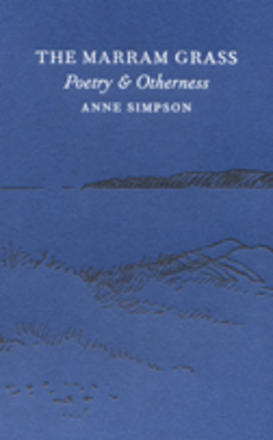 In six essays, poet and novelist Anne Simpson traces the paths of her thoughts, from observation to association, through poetry, language and metaphor, otherness and wilderness. Walking the beaches and trails near her home in Antigonish, Nova Scotia, Simpson studies the connections ... Read more

In six essays, poet and novelist Anne Simpson traces the paths of her thoughts, from observation to association, through poetry, language and metaphor, otherness and wilderness. Walking the beaches and trails near her home in Antigonish, Nova Scotia, Simpson studies the connections between outdoors and inner life.

A hike along a local ridge and the sighting of an owl spurs an examination of birdsong and its kinship with poetry, whose own perch is somewhere near the edge of grammar, beyond sure knowledge, where resonance and insight take the place of certainty?what Thoreau called “tawny grammar. ” Following the owl, Simpson takes us to the underworld, also home to otherness, and to the Spanish concept of duende, the imminent presence of death in life.

In the work of other artists?Matthias Grunewald’s Isenheim Altarpiece, Elizabeth Bishop’s poetry and lesser known visual art, and the fiction of Nabokov, Borges and Dostoevsky?Simpson ponders the location of the other in what is presented as subject. For in this impasse between what readers and viewers and even the subjects themselves see and cannot see resides the death in life, the wilderness on the edge of grammar.

Along the way, Simpson shares some of her own poetic process. The final piece in the collection recounts attempts to write poetry in response to a friend’s photographs. Simpson writes of missteps and her eventual decision to abandon grammar in an effort to move closer to the emptiness that form illuminates and that illuminates form. This consideration of form takes on board the Buddhist teachings found in the Heart Sutra, the commitment and responsibility we have to imagine what we are not. Here then is the other that compels the poet to write, to occupy a place on the outside edge of onself.

“This book is a kind of wild walking,” Simpson says, “because, as I was writing it, my thinking became a little wild, brambly and overgrown?a kind of elderberry bush. The walking and writing became almost indistinguishable. I’d be busy turning something over in my mind?imagining a world without grammar, for instance?while walking in the woods at the Fairmont Ridge, and be startled out of it by the drumming of a ruffed grouse. In winter, walking across ice, I began thinking that the descents and ascents of poetry were like those of the shamanic journey. And why was poetry so intimately concerned with suffering?did it reveal voyeurism or a depth of care?These essays range around Nova Scotia, as I kept returning to the way this province has become the home of my thinking, not just the place where I live. The final essay, which seemed to grow out of the marram grass along the barrier beaches of the Northumberland Strait, traces the connection between the Heart Sutra and poetry. I guess the real question, in each of these essays, is the way writing depends upon otherness?and how it arcs toward a relationship with the other. ”