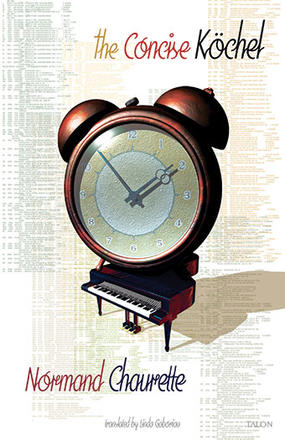 The Concise Köchel cannot be substituted for the ?Complete” catalogue. Published in response to the many requests from musicologists and musicians received by the publishers Breitkopf and Hartel, this abridged, less costly and easier to handle edition is designed to meet the ... Read more

The Concise Köchel cannot be substituted for the ?Complete” catalogue. Published in response to the many requests from musicologists and musicians received by the publishers Breitkopf and Hartel, this abridged, less costly and easier to handle edition is designed to meet the most frequent needs of those interested in the works of Mozart.

It’s All Hallows’ Eve, and the Motherwell sisters, Lili and Cecile, have invited their musicologist patrons, the Brunswick sisters, to attend them on this crucial day. All their lives, Lili and Cecile have practiced on their pianos, to the exclusion of everything else. Their interpretations of Mozart, as the impresario Mendel says, are ?too impeccable, too irreproachable,” there is ?too much politeness, too much purity, not enough passion. ”

They wish to discuss something hidden in their basement?someone has strayed from their score, someone has improvised, the hands of the clock need to be turned back.

“The situation and dialogue are intriguing. ..The play may be difficult, but Chaurette's unnerving climax should lead to heated and extended discussions in the lobby after the play is over. ”
— Stage Directions

“The situation and dialogue are intriguing. ..The play may be difficult, but Chaurette's unnerving climax should lead to heated and extended discussions in the lobby after the play is over. ”
— Stage Directions