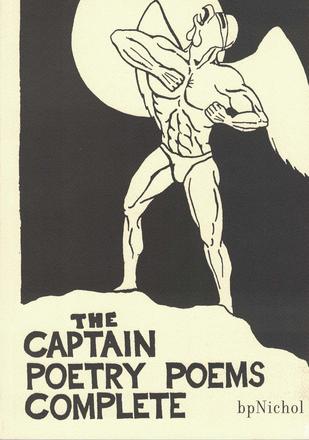 Poetry, comic book art, pop culture, concrete poetry, the lyric, the myth of the cowboy, even the myth of the poet-hero: these are just some of the avenues explored by bpNichol in The Captain Poetry Poems. In this short portrait of the poet as a young man, our hero is a dilemma: ... Read more

Poetry, comic book art, pop culture, concrete poetry, the lyric, the myth of the cowboy, even the myth of the poet-hero: these are just some of the avenues explored by bpNichol in The Captain Poetry Poems. In this short portrait of the poet as a young man, our hero is a dilemma: part fabrication and part confession, Cap is a character created by these poems that extends their author into realms of possible identities. Who is he? Is he a poet? Is he a hero? Is he the bearer of heretofore important and unknown knowledge about the world? Written at a time when questions about what poetry might be; when questions about what the figure of the poet might be, The Captain Poetry Poems shows Nichol working through some of the clichŽs inherant to both his craft and his identity. Playful, even at times silly, but never without the human intelligence Nichol is best known for, these poems may not be the "best" work in Nichol's oeuvre, but their experiments reveal important considerations for poets and their approach to craft.

Originally published in 1970 as a mimeo production by bill bissett's seminal blewointment press (the same year that Michael Ondaatje issued his documentary on Nichol titled The Sons of Captain Poetry), smatterings of The Captain Poetry Poems have appeared over the years but never in their entirety. Now, in "official book form" for the first time, these poems will at last be available to scholars, poets, and other fine human beings. With an introduction by bill bissett and an afterword by George Bowering.

bp Nichol was one of Canada’s most challenging and innovative poets. His writing spans a remarkable range—from concise allegories on a single letter, on through to sound poetry, fiction, theoretical investigations and culminating in his nine-volume poem The Martyrology. Meanwhile: The Critical Writings of bpNichol (2001), bpNichol Comics (2001), Rational Geomancy (1992) and Selected Writing: As Elected (1980) are also available from Talonbooks.

bill bissett garnered international attention in the 1960s as a pre-eminent figure of the counter-culture movement in Canada and the U.K. In 1964, he founded blewointment press, which published the works of bpNichol and Steve McCaffery, among others.

bissett’s charged readings, which never fail to amaze his audiences, incorporate sound poetry, chanting and singing, the verve of which is only matched by his prolific writing career—over seventy books of bissett’s poetry have been published.

A pioneer of sound, visual and performance poetry—eschewing the artificial hierarchies of meaning and the privileging of things (“proper” nouns) over actions imposed on language by capital letters; the metric limitations imposed on the possibilities of expression by punctuation; and the illusion of formal transparency imposed on the written word by standard (rather than phonetic) spelling—bissett composes his poems as scripts for pure performance and has consistently worked to extend the boundaries of language and visual image, honing a synthesis of the two in the medium of concrete poetry.
Among bissett’s many awards are: The George Woodcock Lifetime Achievement Award (2007); BC Book Prizes Dorothy Livesay Prize (2003) peter among th towring boxes / text bites; BC Book Prizes Dorothy Livesay Prize (1993) inkorrect thots.