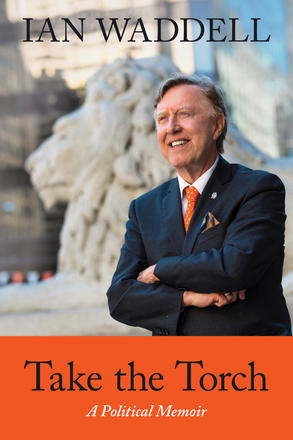 Take the Torch is a compelling memoir from one of BC’s most widely accomplished and animated politicians, Ian Waddell, QC. Waddell takes us on a journey through his life and career as a storefront lawyer, an NDP Member of Parliament, a Minister of Culture, a writer, a ... Read more

Take the Torch is a compelling memoir from one of BC’s most widely accomplished and animated politicians, Ian Waddell, QC. Waddell takes us on a journey through his life and career as a storefront lawyer, an NDP Member of Parliament, a Minister of Culture, a writer, a teacher, a film producer and more—delivering a smart, humorous, endearing and impossible-to-forget exploration of public life.

Following up Donna Macdonald’s Surviving City Hall, Take the Torch is Nightwood’s second publication in a campaign to promote participation in civic affairs and community activism to younger generations. Waddell endeavours “to pass on some of the lessons I learned about setting goals for social change and the methods to use to get there … debating, protesting, and marching to ‘biting dogs’ at press conferences (following the old adage ‘dog bites man is not a story; man bites dog is a headline’), writing op-ed pieces for newspapers, getting elected, taking on prime ministers, dictators and kings, grabbing maces, lobbying diplomats in the lobby of the United Nations, and bucking your own party. ” Waddell got his start through his involvement as a young lawyer, from an immigrant family, in both the first consumer class-action lawsuit in Canada and the Berger Inquiry into the Mackenzie Valley Pipeline.

I have always had a revolutionary idea about law: that it is about justice and that it can be used to make change in society. That’s why I started as a criminal lawyer, and why I went on to be a storefront lawyer, assistant to Judge Berger, and then a member of both the federal Parliament and the BC legislative assembly. What I love about Canada is that we are still a young country and still a place where you can make change happen. In this book I describe some of those changes—many of them are big changes, historic events for our country and our people; others are tiny incidents that helped only one person or a small group, but they’re still important. Often I played a minor role, but my part was big enough to give me an inside look at how change happens.

Ian Waddell is a Canadian politician, author and filmmaker who served in the Canadian House of Commons from 1979 to 1993 and in the Legislative Assembly of British Columbia from 1996 to 2001. In 2002, he released the political mystery novel A Thirst to Die For (NeWest Press, 2002). Currently, Waddell is a documentary film producer and a consultant in environmental and aboriginal affairs. In December 2013 he was appointed the honorary title of Queen’s Counsel for his merit and exceptional contribution to law. His film The Drop: Why Young People Don’t Votewon the Best Producer Award in the Beverly Hills Film Festival. He lives in Vancouver.

“. .. a highly entertaining read for those with a hankering for late 20th-century Canadian political history. ” ~ Charlie Smith, The Georgia Straight

“Former New Democrat MP Ian Waddell has written an oddly interesting political memoir. . . his Take the Torch does capture the mood of that period during the ’70s and ’80s when change was in the air and all things seemed possible. ” ~ Thomas Walkom, Toronto Star

“I recommend Take the Torch to anyone wanting a first-hand and front-row view of some of the most interesting political events of the last forty years — especially on the federal level. Waddell comes across as both a gentleman and a man on a mission, especially for causes related to the respectful constitutional position of Canada’s Indigenous peoples. Take the Torch is also a manual on how to get things done on behalf of the electorate in Ottawa and Victoria — both publicly and behind the scenes. ” ~ Rod Drown, The Ormsby Review, January 30, 2019

“It’s hard to believe in this day of hyper-partisanship that a Prime Minister would say of a political opponent as Brian Mulroney did of Waddell: ‘Always prepared, always effective, always thoughtful, and always acting in Canada’s national interest. ’

His memoir reflects that. Perhaps it will inspire a return to a more humanist approach. ” ~ Ian Mulgrew, Vancouver Sun