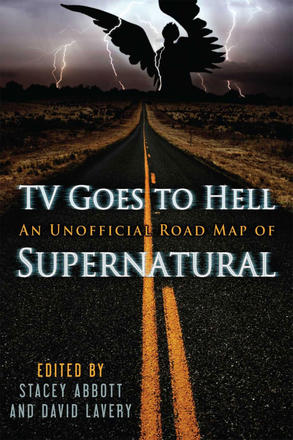 As a natural heir to the long-running television series Buffy the Vampire Slayer, Supernatural has risen to prominence with a strong cult following, and this collection of essays from contributors around the globe investigates the genre-bending series’ cultural footprint ... Read more

As a natural heir to the long-running television series Buffy the Vampire Slayer, Supernatural has risen to prominence with a strong cult following, and this collection of essays from contributors around the globe investigates the genre-bending series’ cultural footprint both in North America and abroad.

The book explores topics such as folklore, religion, gender and sexuality, comedy, music, and much more, and offers a brief guide to all the episodes as well.

Supernatural follows brothers Dean and Sam Winchester as they encounter and battle evil beings such as vampires, shapeshifters, ghouls, and ghosts from a multitude of genres including folklore, urban legends, and religious history.

Contributors to the collection come from the U. S., the UK, Canada, Denmark, Iceland, Spain, and Austria.

In “Bad Day at Black Rock” (3. 3) and “Yellow Fever” (4. 6) Sam and Dean come under the influence of magical forces that not only threaten to kill them but yield slapstick comic moments that one does not expect to see in a show that presents itself as horror. In “Bad Day at Black Rock” Sam loses a “lucky” rabbit’s foot and is cursed with bad luck, which causes him to fall over, lose his shoe down a sewer, catch on fire, get shot, and sit in a chair, unable to scratch his nose for fear of the dire consequences that may follow. In “Yellow Fever,” while Sam is squirted with spleen juice when observing an autopsy, Dean catches “ghost sickness” from the corpse. This contagious virus, according to Sam, causes its victims to “get anxious, then scared, then really scared, then your heart gives out,” reducing Dean to the comic “fraidy cat” role more typical of Lou Costello in Abbott and Costello Meet Frankenstein (1948) or Bob Hope in The Cat and the Canary (1939). Dean becomes afraid of heights, speeding, junk food, teenagers, cats, Yorkshire terriers, and even carrying his own gun, choosing to “man the flashlight” instead. It’s classic slapstick at its finest.

Other television shows that can be described as TV horror, such as Buffy the Vampire Slayer (1997—2003), Angel (1999—2004), The X-Files (1993—2002), and Doctor Who (2005—), similarly contain both comic moments and episodes, but these series are more overtly characterized by their genre hybridity, allowing for a greater expectation of comedy within their particular matrix. The X-Files brings together science fiction, conspiracy thriller, procedural series, melodrama, comedy, and horror, while Buffy is a hybrid of the teen genre, horror, melodrama, romance, and, occasionally, musical. Lorna Jowett has argued that Angel “slips from one [genre] to another and thus retains multiple associations that help frame its narrative or emphasize its themes” (“Plastic, Fantastic?” 176), while Matt Hills has argued that the new Doctor Who is “more generically flexible and multiple than its predecessors” (13).

Supernatural is, of course, also a hybrid series, mixing horror and the road movie with melodrama, but unlike the other shows mentioned above, it privileges horror as its dominant generic mode, visually and narratively. The first season clearly establishes the show’s horror credentials with monster/urban-legend-of-the-week storylines, regular blood and gore, and near-weekly allusions to classic examples of the horror genre, including The Ring (1998), Don’t Look Now (1973), The Shining (1980), and Poltergeist (1982). It is only once the horror genre conventions are established that the show begins to infuse comic moments into otherwise dramatic episodes or incorporate comedy episodes into its seasonal narrative arc. Much of the humor on display in Supernatural is generated by the show’s intertextuality and postmodern narrative interplay, as demonstrated in “The Monster at the End of This Book” (4. 18), in which Sam and Dean discover the Supernatural series of books that chronicle their every mission. When they meet the writer of these novels, Carver Edlund1, a. k.a. Chuck, he is shocked to discover that his literary creations are real and horrified by what he has put them through:

Chuck: I toyed with your lives. Your emotions for … entertainment.

Chuck [turning to face Dean with a horrified look on his face]: Did you really have to live through the bugs?

Chuck: What about the ghost ship?

Dean: Yes. That too.

Chuck: I am so sorry. I mean horror is one thing but to be forced to live bad writing…. If I would have known it was real I would have done another pass.

The humor of this scene is derived from Chuck’s reference to “Bugs” (1. 8) and “A Red Sky at Morning” (3. 6), episodes that Erik Kripke has openly criticized as examples of bad writing on the show (Knight, Supernatural: The Official Companion Season 1 50—51; Season 3 45). This postmodern approach to the show is discussed in detail by Alberto N. García on pp. 146—160 in this volume. I am interested in those comic episodes that use physical or slapstick humor and draw out from Jensen Ackles and Jared Padalecki decidedly comic performances that undermine their more conventional heroic personas and seem, on the surface, to be at odds with the show’s horror identity.

Despite their seeming opposition in style and content, horror and comedy do share a great deal in common. They are both affective genres built upon the emotional effect they have on their viewers, evoking fear and laughter respectively. They also share many thematic similarities and preoccupations. Both genres regularly undermine social or cultural conventions, transgress accepted gender roles, and exploit, for comic or horrific effect, the body out of control. They both exist within a liminal space in “between the set rules of society” (Horton 5). Andrew Horton argues that “a work that is identified in a way as comic automatically predisposes its audience to enter a state of liminality where the everyday is turned upside down and where cause and effect can be triumphed over and manipulated” (5). Horror similarly operates within a space in which the rules of the natural world and society are overturned through the existence of ghosts, vampires, and other monsters, as well as human serial killers or slashers. Furthermore, both genres are preoccupied, as Pete Boss argues, with presenting the body in “profuse disarray” (15). Andrew Tudor argues that “whether set to the task of conveying the peculiar fascination of monstrousness or simply portraying the horrific violence practiced by movie monsters upon their victims, bodies are inevitably to the fore in horror movies” (25). Comedy is similarly preoccupied with the body under attack, whether that be a pie in the face, a pratfall, or the coyote falling off yet another cliff in his never-ending pursuit of the road runner. As Lorna Jowett argues in “Biting Humor: Harmony, Parody and the Female Vampire,” theory explains the similarities between comedy and horror “in terms of the carnivalesque, the grotesque, or transgression and subversion. Horror films have often contained humor and there has been a long tradition of horror-comedy (like Shaun of the Dead, 2004) and comedy-horror (such as Dracula: Dead and Loving It, 1995). Horror on television operates rather differently than on film and, perhaps, draws on humor more consistently to achieve its effects and success with its audience” (17—18).

Here Jowett highlights the difference between TV and cinematic horror, generally attributed to the restrictions upon the representation of violence and the body on television, as well as the positioning of television within the domestic space, which can affect how viewers engage with their programs. These fundamental differences have meant that creators of TV horror must reconfigure the conventions and aesthetics of the genre to suit the industrial and cultural specificity of television. 2 Part of this reconfiguration involves the interrelationship between humor and horror, designed to enhance horror effects and the exploration of the genre’s cultural preoccupation with the notions of good and evil, the body in disarray, and the abject. As Jowett points out, serial television offers greater opportunity for character nuance and development and enables “more scope to use both comedy and horror as ways of offering new stories or angles on a familiar premise and cast” (18). The aim of this essay will, therefore, be to explore how the comic is used in Supernatural, not to diffuse the genre and make it more acceptable for mainstream television, but as a strategy for the construction of TV horror and in the representation of the monstrous hero.

“The writers clearly know their show lore, utilizing it to examine topics ranging from religion to feminism, fandom to the business aspect of television. ” — San Francisco Book Review

Other titles by David Lavery