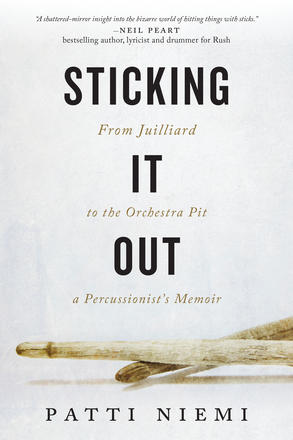 A vivid look inside the elite and cutthroat classical music world

When Patti Niemi was 10 years old, all the children in her school music class lined up to choose their instruments. Boy after boy chose drums, and girl after girl chose flute — that is, until it was Patti’s ... Read more

A vivid look inside the elite and cutthroat classical music world

When Patti Niemi was 10 years old, all the children in her school music class lined up to choose their instruments. Boy after boy chose drums, and girl after girl chose flute — that is, until it was Patti’s turn. From that point onward, Niemi devoted her life to mastering the percussive arts. Cymbals, snare drum, marimba, timpani, chimes: she practised them all, and in 1983, she entered Juilliard, the most prestigious music conservatory in the world.

Set against the backdrop of a rapidly changing New York City in the 1980s, Sticking It Out recounts Niemi’s years mastering her craft and struggling to make it in a cutthroat race to a coveted job in an orchestra. Along the way, she has to compete with friends, and face her own crippling anxiety and reliance on prescription medication, while confronting the delicate, and sometimes perilous, balance of power between teachers and their students.

Niemi’s memoir brings us inside a world that most of us never get to see: gruelling practise schedules, intimate musical relationships, and long moments at the back of an orchestra spent sweating and counting before a big cymbal crash. Sticking It Out is a humbling account of the work that leads to a dazzling moment of perfection, and of the dogged persistence it takes to follow a dream.

Patti Niemi has played percussion in the San Francisco Opera Orchestra since 1992. She graduated from the Eastman School of Music Preparatory Department in 1983 and earned a BM from the Juilliard School in 1987. Niemi was a member of the New World Symphony in Miami from 1988–1992.

“A shattered-mirror insight into the bizarre world of hitting things with sticks.” — Neil Peart, bestselling author, lyricist and drummer for Rush

“Sharp like a flam, resonant like the end of a roll, Sticking It Out is everything you want a music memoir to be . . . funny, honest, and memorable.” — Kevin Smokler, author of Practical Classics: 50 Reasons to Reread 50 Books You Haven’t Touched Since High School

“Through her keen, unflinching eye, the book is fantastically blunt, almost clinical and peppered with enough humor to keep it realistic . . . Niemi gives us a look into a world not often talked about — the cutthroat, competitive world of becoming a professional classical musician.” —No Recess! Magazine

"By turns reflective and dramatic, poignant and hilarious, Sticking It Out offers an irresistible portrait of the artist as a young percussionist. In deft and swiftly drawn narrative strokes, Patti Niemi charts the formation of a career in music — the endless hours in the practice room, the stomach-churning anxiety of auditions, the blend of competitiveness and camaraderie that shapes relations among up-and-coming musicians — and she does it with wit and personality to burn. She's as adept at writing as she is at standing in a corner and banging on things." — Joshua Kosman, San Francisco Chronicle

“Patti Niemi’s oft-hilarious memoir shatters images of percussionists as fearless aggressors who drive and pound their way through life. Instead, it presents the image of an emerging artist pounded by fear and insecurity. As she tells her tale with disarming candor, Niemi opens the door on the mental and artistic challenges facing all aspiring classical musicians in an era of shrinking avenues for professional practice. After she takes us through the wringer, as it were, she enables us to breathe a huge sigh of relief, if not make a joyful racket, as she lands her gig with the San Francisco Opera Orchestra. Brava!" — Jason Victor Serinus, journalist, Opera News, San Francisco Classical Voice

“One of the funniest-ever classical-music books . . . and certainly among the best written.” —Philadelphia Inquirer