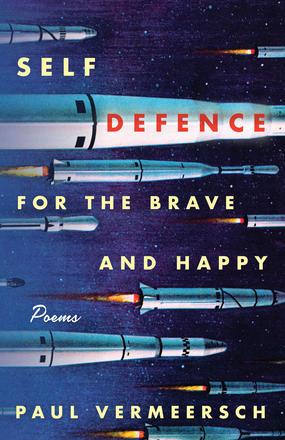 It is the Third Millennium. The 20th century is a memory. Humans no longer walk on the moon. Passenger planes no longer fly at supersonic speeds. Disinformation overwhelms the legitimate news. The signs of our civilization’s demise are all around us, but hope is not lost. ... Read more

It is the Third Millennium. The 20th century is a memory. Humans no longer walk on the moon. Passenger planes no longer fly at supersonic speeds. Disinformation overwhelms the legitimate news. The signs of our civilization’s demise are all around us, but hope is not lost. In these poems, you will find a map through our dystopia and protection from all manner of monsters, both natural and human made. Only the products of our imaginations — buildings and movies, daydreams and wondrous machines — can show us how to transform our lives. Self-Defence for the Brave and Happy is a survival guide for the Dark Age that lies ahead.

1: The Country of Previous Enthusiasms

The Country of Previous Enthusiasms

The grandeur of their Expos was familiar:

their pastime was commuter rail departing

from geodesic spheres, and grand arches built to span—

The elders of our nation found it quaint.

Their designers were philosophers. Ours,

engineers. In their country, with its globular buildings,

and lanky, finned automobiles, the people

have more efficient use of space.

They would chat with their neighbours about

such bric-a-brac, and visit their landmarks

in eager groups. When they finally reached

the age of shortage, overcome by harsher facts,

their assimilation was all but certain.

There could be no treaty. It isn’t just

There was always so much waste, even in the way

they walked. Our incursion was immaculate.

We are a decent people who only wish to be correct.

There would have to be another vision for occupying space,

new rituals for sitting and standing, for the physical interruption

of the planar world. No longer would we distinguish

between exist and inhabit. No asking where we live.

We live. Now to lug our dwellings like a hermit crab

or not. What would the word for shelter be?

We would vote by standing upright, and emphasize

ourselves by raising our hands, lengthening our votes

as a challenge to the levelness of the meeting place.

Prisons would be nothing—but banishment theoretical and severe:

how best to find a cave or shade beyond the vanishing point?

And who goes there? It was the heretic and prodigy who said:

I can make a cathedral of my condition and worship there.

We’d have to rethink our investments—bearish

on the local trade. We never put much stock in that.

And reckless with our gratitude, assigning it

helter-skelter to the windfall and the kill.

Otherwise, we’d only have ourselves to thank.

But we’d be bullish on travel points and dining out.

And bad with names: no Mud Hens, no Netherlands.

Of course there would be more fundamental gaps.

Just tally up the unanswered questions: How

do you make a straight line run parallel to another?

What are the secrets of the integer and the abacus?

When does the accounting of an ox head lead to A?

Without roots, we’d find the answers here and there.

Here, the world would be our chocolate factory.

There, we wouldn’t have to settle for anything.

“Beautiful . . . Part inspirational tract (borne of a deliciously playful inspiration, not the usual kind), part prophetic revelation, and all crafted with Vermeersch’s signature elan, Self-Defence for the Brave and Happy is a generous chocolate box stuffed with bon(-bon) mots, the perfect gift for your inner visionary. Shine on, you crazy zircon. ” — This Magazine

“Wit is Vermeersch’s stylistic signature, and it is present at full power in this collection. ” — The Coil Magazine

“Paul Vermeersch’s Self-Defence for the Brave and Happy is in turns wry, funny, horrifying and incisive . . . It both delights during a quick read and rewards careful re-reading, and I highly recommend it . . .  Self-Defence for the Brave and Happy is perceptive, carefully-crafted, melancholy and funny. The simultaneously critical and wryly amused attitude of the collection is perhaps the only self-defence that we have against time and the monsters of our own creation. ” — The /t?mz/ Review 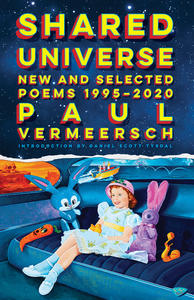 Paul Vermeersch’s poetry has always been fascinated with the question of what makes us human. From the human body to the human mind, from our place in society to our place in the cosmos, Vermeersch’s latest book Shared Universe: New & Selected Poems 1995-2020  (ECW ... Read more

Other titles by Paul Vermeersch