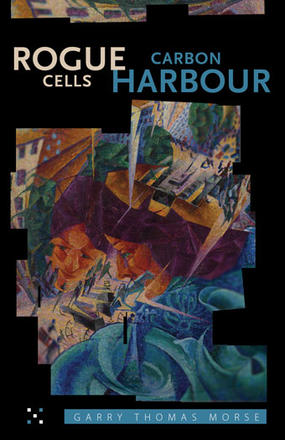 In Rogue Cells, Oober Mann emerges from his cryobed on high alert in New Haudenosaunee, a nation at war with the mysterious territory Nutella during a critical election year. Citizens here live in dread of celebrities who carry out terrorist actions in defence of their own fundamentalist ... Read more

In Rogue Cells, Oober Mann emerges from his cryobed on high alert in New Haudenosaunee, a nation at war with the mysterious territory Nutella during a critical election year. Citizens here live in dread of celebrities who carry out terrorist actions in defence of their own fundamentalist belief systems, including Stratford-upon-Avonists, whose guerrilla conflicts stem from slight variations of Shakespearian texts; Drumhellerists, whose discovery of some dinosaur bones results in a polygamous sect; and Chaos!tologists whose divine teachings are to be found in an obscure book with questionable authorship. Mixed up in an assassination plot being investigated by ISM (Insurgent Saddo Management) and DNA-specialist cops, Mann begins to wonder about the nature of reality and even about the new woman in his life, a femme fatale known only as the Librarian.

It is the Age of Aquarium in the speculative “green” dystopia of Carbon Harbour. Omni-magnate Cornelius Quartz is overseeing the merger between Bildung Endustries and Foreign Objects, but is distracted by an imminent double wedding for himself and his daughter; by the loss of his best promoter and lover to his rival, Zirconium Bluff; and by working conditions in the rehashing core and on wind pharms for hardlucks who harvest bio-material to produce architecture, clothing, and other swag for a luxury class of hardcore gamers (they pay for “pollution fantasies” with carbon credits on extended getaways to Putridworld). Threats to these halcyon days include a new religion publicized by Minor and his daughter Diminuenda that is “Old Testament-style,” Mr. Goo’s long-awaited release of the “MeMeMe” device, an interstellar pipeline project, the proliferation of aquacukes and giant composting worms that are rapidly running out of garbage, a word virus cultivated by the last carbon-based poet, and the controversial awarding of the Ignoble Prize. Rogue Cells / Carbon Harbour resumes The Chaos! Quincunx novel series.

Garry Thomas Morse has had two books of poetry published by LINEbooks, Transversals for Orpheus (2006) and Streams (2007); two collections of fiction, Death in Vancouver (2009) and Minor Episodes / Major Ruckus (2012), published by Talonbooks; and two books of poetry published by Talonbooks, After Jack (2010) and Discovery Passages (2011). Discovery Passages was a finalist for both the Governor General’s Award for Poetry and the Dorothy Livesay Poetry Prize, and was voted One of the Top Ten Poetry Collections of 2011 by the Globe and Mail and One of the Best Ten Aboriginal Books from the past decade by the CBC’s 8th Fire. Morse’s work is regularly published in literary magazines, journals, and anthologies, and studied at post-secondary institutions, including the University of British Columbia and Simon Fraser University. Morse is the recipient of the 2008 City of Vancouver Mayor’s Arts Award for Emerging Artist and has twice been selected as runner-up for the Robert Kroetsch Award for Innovative Poetry.

“Rogue Cells / Carbon Harbour provides two books in one, beginning with a satiric parody, romping across Native American territory to skewer a breadth of contemporary idiocracies as they emerge from celebrity narcissism, bizarre cult fervor, fundamentalist zealotry, and rampant paranoia over terrorism. Fun for the whole family! Meet you in the alleyway, George Orwell! There is no escape clause as we pursue the Ignoble Prize during a dystopian eco-meltdown, replete with alien life-forms, brazen mineral exploitation, extreme bio-harvesting, and luxuriously decadent contamination junkies, hustling us through a disintegration dance, during the Age of Aquarium. Unrepentant and unremitting pandemonium! An outrageous tour de farce! Read it! Be moved by Morse!”
—Karl Jirgens, Editor, Rampike magazine

“Surreal, complex, and hilarious … Rogue Cells / Carbon Harbour is best savored slowly … Reading it is like reading poetry, a synaesthetic experience where technology and terrorism are as intimate and tangible as the smell of food or the texture of mud. Infused with Morse’s irrepressible humor, the books [in The Chaos! Quincunx] satisfy all the senses. ”
—Rain Taxi

“Of contemporary surrealist writers, Garry Thomas Morse is the most uncompromising. He courageously severs the umbilical cord with so-called reality and ventures into an invented world paradoxically more real than our own. Brandishing a garish, jolting, jittery, hyper-technicolour style whose energy never flags, his alternate universes embody a satire on current trends that is more biting and relevant than that of seemingly realistic fiction. Enjoy the rollercoaster ride. ”
—Barry Webster, author of The Lava in My Bones

“A vision of life with the liminal and the interstitial excised; our lives if we lived inside the current media representation of our lives … hilarious and bizarre … In Rogue Cells / Carbon Harbour, Garry Thomas Morse has created something new, and we should celebrate it. ”
—subTerrain

“Carbon Harbour is an outrageous romp – wickedly inventive, clever as well as wise, deliciously satirical and steamier than sex and vegetables. Crackling with neologisms, sly elisions and provocative infelicities, it’s a meteoric fable of a future in which unhinged gardeners and gourmands should be particularly pleasured. ”
—Des Kennedy, author of Climbing Patrick‘s Mountain 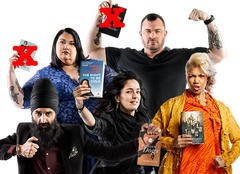 Other titles by Garry Thomas Morse