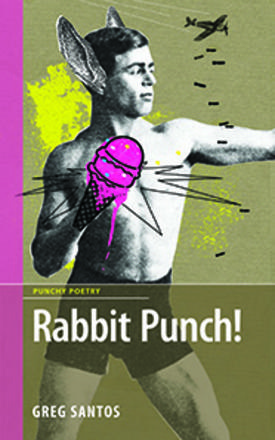 Greg Santos was born and raised in Montreal. He has studied at Mount Allison (Sackville, NB), Concordia (Montreal, QC), Columbia (New York, NY) universities, and received an MFA in Creative Writing from The New School (New York, NY). His writing has appeared in numerous periodicals and anthologies, includings McSweeney's, Nthposition, The Best American Poetry, The Feathertale Review, Matrix, Cha: An Asian Literary Journal, Rogue Stimulus (Mansfield Press, 2010), The Future Hygienic (PistolPress, 2009), Dingers: Contemporary Baseball Writing (DC Books, 2007), and as a featured 'Parliamentary Poem of the Week' selection. He is also the author of the e-book Thinking Things Through (Pangur Ban Party, 2009) and the chapbook Oblivion Avenue (Trainwreck Press, 2008). He currently works as a writing instructor and is the poetry editor of pax americana.

“Rabbit Punch! breaks the neck of poetry and stuffs it in a bag and trudges with it through the forest and spills it out onto the kitchen table, where Tara Reid and John Ashbery dig in. This is a funny, creepy, reverent, irreverent and insolent collection. And likely the only one in the history of literature to mention Tara Reid on the back cover. ” – Stuart RossMRB Review:http://mtlreviewofbooks. ca/reviews/poetry-3/Interview with Nine Day Wonder:http://www. ninedaywonder. com/2014/poet-spotlight-greg-santos-and-his-punchy-poetryInterview with Black Heart Magazine:http://blackheartmagazine. com/2014/08/25/poetic-knockout-an-interview-with-greg-santos/From the Small Press Book Review:“Help is on the way for the Anglophone reader in a global poetry world. Rabbit Punch!, the second collection by Greg Santos, offers an admirable finesse to the reader who craves good verse. ”See full review:http://thesmallpressbookreview. blogspot. ca/2014/08/poignant-plain-groovy-review-of-greg. htmlReview in The Link:http://thelinknewspaper. ca/article/6054Review in Resonance Café blog:“This punch will leave the reader intoxicated. ”http://resonancecafe. com/echo/?p=551From Michael Dennis, http://michaeldennispoet. blogspot. ca/2015/05/rabbit-punch-greg-santos-punchy. html:"Greg Santos is one skilled cat. You might think he is a sprinter at first, these poems race by so fast with their jet-speed alacrity. You could also make a good argument that Santos could be a stand-up comic of a particular type of brilliance -- throwing out poems so quick, so deft, so off-the-cuff, that they could easily be mistaken for one-liners but in fact, this a feast of punch lines. Punches coming at you so fast and furious you'll be punch-drunk in no time. "

Other titles by Greg Santos