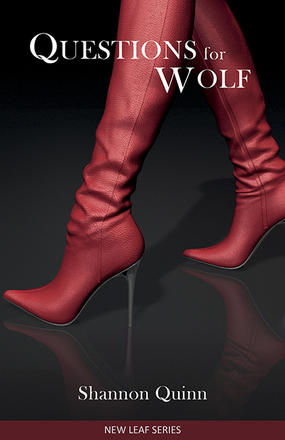 Questions for Wolf, Shannon Quinn’s debut poetry collection, explores desire and memory, examining the damaged lives of characters whose street smarts are their only defense against self-destruction and loss of hope. Quinn’s poems delve into a world of “inner city mortifications” ... Read more

Questions for Wolf, Shannon Quinn’s debut poetry collection, explores desire and memory, examining the damaged lives of characters whose street smarts are their only defense against self-destruction and loss of hope. Quinn’s poems delve into a world of “inner city mortifications” as she contemplates lost innocence and how the longing to be great rather than merely good can drive people to pursue a life along society’s margins. From adolescent girls getting a taste of adulthood around a bonfire in “Bonfire” to the sex workers who hold their own on the dark streets of Quinn’s hazy, almost mythical universe, readers are transported through the “peculiar urban sprawl of being a girl” and presented with a celebratory defiance of the expectations projected onto women.

Questions for Wolfis a collection of dark yet delicate poems, celebrating the myth and magic associated with female sexuality and agency. Themes of lost innocence, damaged lives, addiction, and destitution intermingle with a celebration of life outside the margins, as Quinn weaves beautiful narratives out of the ugly bits of life. Images of childlike purity combine with tragedy as the collection follows a motley gang that includes “the morphined, the moon-shined,/the induced amnesiacs and the bicycle thieves” as they stage a revolution against polite society and “pulverize the idea of being good instead of great.”

Stark natural imagery combines with Quinn’s magic-infused metaphors as she describes liquid skies filled with stars and the simultaneously soothing and oppressive force of water as it alternates between the serene waves of a fresh hit and the sound-muffling burden placed on revolutionaries “chained to the ocean floor”. Bears, dogs, elephants, and other strange beasts including carnivorous sheep take shadowy shape throughout the collection as Quinn delves into our animal urges and confronts society’s tendency to enforce order but offer no guidance. “Where were our birders when we needed them?” she asks in “Animal Secrets”, but this probing discontent reveals fewer answers than questions.

Despite being a collection exploring wounds and sorrows, Questions for Wolfis also fundamentally about redemption as Quinn explores the strength it takes to reclaim a shattered life. Quinn dares herself to transform grief into something beautiful, and the result is an eloquent statement about hope against all odds.

Shannon Quinn has a Bachelor of Fine Arts in Theatre from the University of Alberta and a Bachelor of Applied Arts in Radio and Television Production from Ryerson University. She has produced numerous radio documentaries for CBC Radio One. Quinn is the author of Questions for Wolf (Thistledown Press). Her work has appeared in ARC, Room, CV2, Prairie Fire, Grain and The Mackinac. She lives in Toronto. She has a thing for cats.

Girl spinning madly,
small body in a sweet secret spot.
I see seven kinds of light in the stratosphere.
The changing colour of night
charters my body on a transcontinental flight
to an improbable republic
where quick hands from questioning customers
pay for eight dollar dances
as the opening chords for Walk on the Wild Side
throw out leaky lifeboats for the wonderless and bored.
I am at the bottom of a well
watching myself being watched
as I whisper bedroom monologues.
The body has a way of broadcasting from remote locations.
But even here the opening chords to that hustler’s anthem
sound the same.
Here Salvation captains a lifeboat
with a smoke dangling from her lips.
Here Mascara cakewalks
through the creases around my eyes
but I swear I am in thundering rotation
under a gin blue sky
as I strap on lucite heels
solid rigging
for a heart that’s all eyeballs
and cannot feel its occupation.

I am a living saint
suspended in the night sky,
in a damp farmer’s field.

In a crown of mud and twigs
I swig sludge from a thermos culled from a parent’s liquor cabinet.
It tastes the same as the last boy did.

Returning to the fold at the fire,
my trips and stumbles are caused
by the childhood dragging behind me in the dirt.

In a circle of girls,
too young to be with boys who drive cars,
I bear witness
as each one’s hair sparks.
Burning halos.
Brief miracles.

Other titles by Shannon Quinn