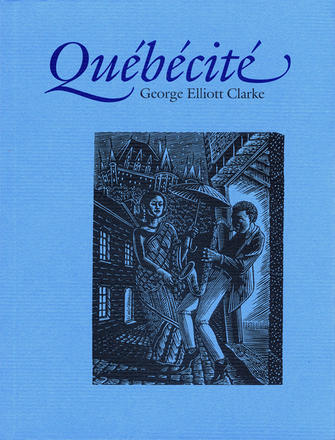 George Elliott Clarke’s Québécité is a three-act multicultural romance set in modern-day Québec. It tells the story of two interracial couples whose blossoming relationships expose the perils and possibilities of loving across racial and cultural lines. Québécité is ... Read more

George Elliott Clarke’s Québécité is a three-act multicultural romance set in modern-day Québec. It tells the story of two interracial couples whose blossoming relationships expose the perils and possibilities of loving across racial and cultural lines. Québécité is an expanded, poetic rendering of a libretto George Elliott Clarke wrote at the request of the Guelph Jazz Festival, with music composed by Juno award-winning pianist D. D. Jackson. The opera will debut in Guelph during this year’s festival (September 3 to 7) with a cast including Haydain Neale, Kiran Ahluwalia, Yoon Choi and Dean Bowman.

As Clarke writes in his prelude: “This libretto is for connoisseurs. Its stanzas were sculpted of the aggravated gravitas of Miles Davis’s trumpet, the scalacious solace of James Brown’s howls, the fearless laissez-faire of Oscar Peterson’s piano, and the oceanic négritude of Portia White’s contralto. I confess: it is also a callaloo confectionor gumbo concoctionof Alfred Hitchcock’s I Confess (1953) and films by Marcel Camus, Jacques Demy and Mira Nair. Given these traditions, plus my own tendencies, eccentricities, affinitieslugubrious, lubricious, lubricatedthis production accepts that History is a slaughterhouse, Poetry is an opera house, and that only Love allows us to distinguish Beauty from its exinguishing. ”

“Opera has always been about grand-scale gestures, about excess, about staging the spectacular. Throw jazz into the mix and what you get is [. . . ] a gumbo concoction: one where hope and imagination rainbow over orthodoxy, where improvisation and the capacity to dream reinvigorate our commitment to new understandings of identity, belonging, and collective social responsibility. ” Ajay Heble in the Canadian Theatre Review

“Québécité consists of heavy themes treated in an uplifting plot, in verse suited for jazz fans and lovers of language. ” Kelly Murphy, Montreal Review of Books