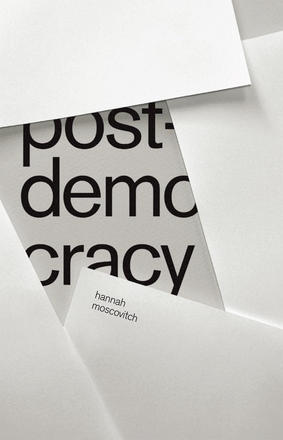 Welcome to the world of the one per cent, the corporate elite, the C-suite, the kingmakers. A world managed by payoffs, press releases, NDAs, and company policies. What happens to morality in this world when its people have limitless power?

When a CEO and his highest executives ... Read more

Welcome to the world of the one per cent, the corporate elite, the C-suite, the kingmakers. A world managed by payoffs, press releases, NDAs, and company policies. What happens to morality in this world when its people have limitless power?

When a CEO and his highest executives are on an international business trip to secure a major deal, a sex scandal between employees is unearthed on the news. As the pressure to complete the deal mounts, more damaging secrets come to the surface, endangering the CEO’s company, family, and legacy.

In this searing look at upper-class privilege, Post-Democracy asks, what does it take to confront corruption?

BILL and LEE, and JUSTINE all sit and stand in the LOUNGE. JUSTINE is expensively dressed: high heels, power suits, and lipstick. All three of them hold drinks: martinis, scotches. All three scroll on their phones. Finally, LEE looks up at BILL and JUSTINE expectantly.

LEE: Guys, Systemas: is the company that you were here to tour, we toured it, what did you think?

JUSTINE: (to LEE) Sorry I’m reading about our company, in the news. (to BILL) Are you looking at this? Dad?

BILL: Yeah.
JUSTINE: This is crazy.

JUSTINE: (reading) “. ..a senior executive frequently sent his executive assistant emails telling her he needed her to be the “T and A at table” when he was meeting buyers: “T and A “stood for Tits and Ass. One time he followed her into the women’s washroom and looked over the top of her stall while she was urinating as a quote unquote joke. ” “He sometimes cornered her on business trips and made advances telling her to make up for her lack of skill on the job by—” Okay, this is that brand manager?

JUSTINE: And the assistant, who’s she?

JUSTINE: Did she go to HR?

BILL: (nods) We’ve fired a couple of HR people: the ones who said her complaint didn’t strike them as…

JUSTINE: But what…? Shouldn’t we be on flights home?

BILL: (to JUSTINE, shrugging) We’re not answering media requests, that’s Shannon’s department. She’s set up a PR camp back home, all interviews go through her. That’s the only one so far. And Connor’s there—

BILL: To handle any legal.

LEE: Are the contracts here?

JUSTINE: (to BILL) Shannon said there was a story out—I didn’t realize how bad.

LEE: Where are the contracts?

LEE: (makes a jerky, frustrated motion with his body and walks away)

BILL and JUSTINE look at LEE.
JUSTINE: What? This seems like it might be about to…be big?
LEE: (to JUSTINE, rhetorical:) Is it affecting stock prices?

JUSTINE looks over at BILL.

BILL: A small dip, but, that could be… (BILL gestures, vague)…

JUSTINE: There are always guys like you who say “24 hour news cycle” and “it won’t affect stock prices…”

JUSTINE: …and sometimes they come into your office and take away the furniture.

LEE: So: Systemas. Let’s buy Systemas, okay? I’d like to finalize the deal. We have the contracts—thank you Justine—let’s get them signed, then we can fly back home and “me too” our way around the business world, we can be all rah rah women are the new men.

JUSTINE: …and what’s happened to the stocks of companies with reputations for sexual harassment…

LEE: …they bounce back.

JUSTINE: Not when it’s the CEO…

JUSTINE: (to BILL:) Some executive assistant’s trying to do her job, and that’s the shit that’s. ..?

JUSTINE: That’s what we want to…! We want to be one of those companies with women crying in the bathroom, because some fucking… brand manager…?

BILL’S phone buzzes. He looks down at it.

BILL walks to the back of the lounge, take the call.

“Subject matter that could feel forced in less-deft hands is rescued from an HR manual and brought to painful, vivid life. ”