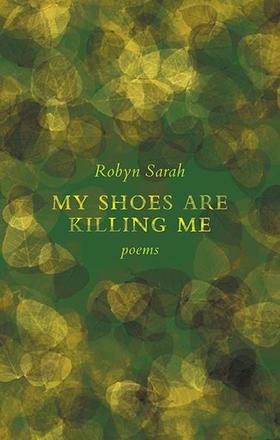 My Shoes are Killing Me

My Shoes are Killing Me

Winner of the 2015 Governor General?s Award for Poetry

Winner of the 2015 Canadian Jewish Literary Award for Poetry

In My Shoes are Killing Me, poet Robyn Sarah reflects on the passing of time, the fleetingness of dreams, and the bittersweet pleasure of thinking on the ?hazardous ... Read more

Winner of the 2015 Governor General?s Award for Poetry

Winner of the 2015 Canadian Jewish Literary Award for Poetry

In My Shoes are Killing Me, poet Robyn Sarah reflects on the passing of time, the fleetingness of dreams, and the bittersweet pleasure of thinking on the ?hazardous ? treasurehouse? that is the past. Natural, musical, meditative, warm, and unexpectedly funny, this is a restorative and moving collection from one of Canada?s most well-regarded poets.

Robyn Sarah was born in New York but has lived in Montreal since early childhood. Her poetry has appeared in Canadian literary magazines and anthologies since the early 1970s. In 1976 she co-founded Villeneuve Publications and was co-editor of its chapbook series. Sarah is the author of several poetry collections, two short story collections, and a book of essays on poetry. She is currently poetry editor for Cormorant Books.

“So assured and musical is the hand that shaped them that these poems tend to memorize themselves, as though they had always formed part of our experience.”—Eric Ormsby

“The cool delight of her poetry is to turn those subjects of routine forgetfulness into words that quiver in the heart ? Sarah knows the language: its pressure points, its traditions, its crevices. Trained as a musician, she also understands flow and timing, when to sing and when to keep silent.”—The Montreal Gazette

“The vigour gets into Sarah?s rhythms and rhymes, as always, but they play here against a melancholic sense, as in blues music.”—Canadian Literature

“Her precise descriptive siftings ... promote a vision of abundance as composed of luminous bits and pieces that never take up more room than they need.”—Arc Poetry Magazine

“ [Robyn Sarah?s] concerns haven?t changed. But her eye on “the beginning of dwindle”—an already oft-quoted mantra from her title poem —has her probing them here with a new urgency, even a kind of abandon. The 'nine movements' that make up “My Feet Are Killing Me” rally defiantly and almost joyfully against that dwindling”—Anita Lahey, The Fiddlehead

“ [Sarah?s] biggest gift is her ability to weave a number of complex themes into a seemingly straightforward yarn ? She can take a perfectly ordinary event and transform it into something magical. Again and again.”—New Canadian Magazine

“Natural, musical, meditative, warm, and unexpectedly funny, this is a restorative and moving collections from one of Canada?s most well-regarded poets.”—49th Shelf

“As [Wallace] Stevens writes in The Plain Sense of Things, 'The absence of the imagination had itself to be imagined.' Robyn Sarah is one of our poet?s in Canada who has attended most readily and vigorously to this hard work, and we are forever indebted to her for it.”—Jeweller?s Eye