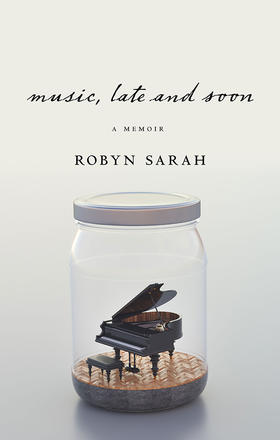 After thirty-five years as an "on-again, off-again, uncoached closet pianist," poet and writer Robyn Sarah picked up the phone one day and called her old piano teacher, whom she had last seen in her early twenties. Music, Late and Soon is the story of Sarah’s return to study ... Read more

After thirty-five years as an "on-again, off-again, uncoached closet pianist," poet and writer Robyn Sarah picked up the phone one day and called her old piano teacher, whom she had last seen in her early twenties. Music, Late and Soon is the story of Sarah’s return to study piano with the mentor of her youth, as well as a reflection on her previously unexamined musical past: a decade spent at Quebec's Conservatoire de Musique, studying clarinet, dreaming of a career as an orchestral musician, but already a writer at heart. Both introspective and speculative, this two-tiered musical autobiography tracks the author's long-ago defection from a musical career path and her late return to serious practice and tells the story of a relationship with an extraordinary teacher remembered and renewed.

Robyn Sarah was born in New York but has lived in Montreal since early childhood. Her poetry has appeared in Canadian literary magazines and anthologies since the early 1970s. In 1976 she co-founded Villeneuve Publications and was co-editor of its chapbook series. Sarah is the author of several poetry collections, two short story collections, and a book of essays on poetry. She is currently poetry editor for Cormorant Books.

“A poem by Sarah could fit into the palm of your hand … Wherever We Mean To Be showcases [her] gifts: her visual clarity, no-nonsense voice, compressed language, rhythmic prowess, and metaphoric agility. These qualities speak from a long-cultivated focus and bespeak a writer who pays fierce attention to the basic fact of being in the world. ” —Anita Lahey, The Walrus

“This city, read by a kind of hidden code, seems lost in time; lives lived in its outmoded rooms have a timeless quality…the voice remains utterly its own, in pursuit of what Sarah calls “the lost soundtrack of daily life. ” —Canadian Jewish News

“So assured and musical is the hand that shaped them that these poems tend to memorize themselves, as though they had always formed part of our experience. ” —Eric Ormsby

“The cool delight of her poetry is to turn those subjects of routine forgetfulness into words that quiver in the heart… Sarah knows the language: its pressure points, its traditions, its crevices. Trained as a musician, she also understands flow and timing, when to sing and when to keep silent. ” —Montreal Gazette