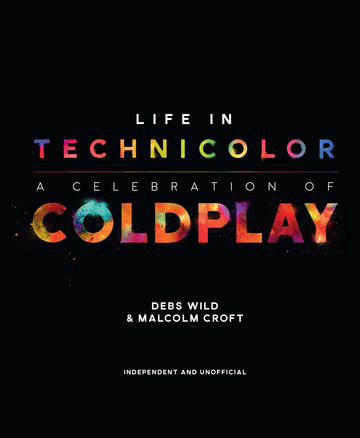 Life In Technicolor: A Celebration of Coldplay

Life In Technicolor: A Celebration of Coldplay

Coldplay’s unique sound has captured the hearts of the world time and time again. From melancholic, thoughtful melodies to energetic thumping bass lines, Coldplay’s musical range is a large part of their popularity, allowing them to appeal to all manner of fans, from young ... Read more

Coldplay’s unique sound has captured the hearts of the world time and time again. From melancholic, thoughtful melodies to energetic thumping bass lines, Coldplay’s musical range is a large part of their popularity, allowing them to appeal to all manner of fans, from young to old. Written by Debs Wild, the A&R executive who discovered Coldplay, and former music journalist Malcolm Croft, who have known and worked with the band intimately over twenty years, this book provides unparalleled access into the inner workings of the musicians’ world, including rehearsals, early club gigs, and candid backstage moments over their career including their 2017 global sensation tour, A Head Full of Dreams. Life in Technicolor: A Celebration of Coldplay delves deep into the band’s popularity, analyzing their career album by album and giving previously unknown insights into Coldplay’s creative process. With hundreds of behind-the-scenes photographs that have never been published before, Life in Technicolor: A Celebration of Coldplay is the perfect companion for any fan of the band’s fantastic music.

Twenty years ago Guy, Jonny, Will and Chris formed Coldplay. Today they are arguably the biggest band in the world. They have achieved their dreams and so much more. How can we possibly cover it all?

When we sat down to write this book, we found ourselves asking the question “What is it about Coldplay that makes them special enough to have continued on such an upward trajectory for so long?”

As their manager Dave Holmes says, “It’s a pretty incredible story. Twenty years on and it’s still going. They’re in their own lane. ”

From their earliest rehearsals at Jonny and Chris’ flat at 268 Camden Road to selling out Wembley Stadium four nights in a row, all roads have led to where they are today. The band’s determination to succeed has been evident since day one. “Chris and I used to pore over unofficial biographies of bands,” Phil Harvey told us “Anything we could grab our hands on and study the progressions, decision-mking and the personnel – and we loved it. ” It was because of this that we decided to celebrate the band on such a momentous occasion – twenty years together.

After all that time, Coldplay are still a band who wear their hearts on their sleeves, have genuine chemistry together, and the music they create, makes them stronger than ever. Their songwriting has allowed them to remain relevant through the ever-changing musical landscape. There’s nothing manufactured here.

“I think the band’s success is in part to do with their refusal to accept that it is only the four of them against the world. Or that they deserve all the credit,” says friend, actor and writer Simon Pegg. “They are very much the heart of a collective that includes so many people and their graciousness has served to endear them to everyone around them. I think it’s partly why they are still making music. You can’t burn out if nobody wants to set fire to you. ”

To their fans, Coldplay have always been likeable. They are not rock stars in the old mould, they do not court controversy: they are four best friends (five, if you include fifth member Phil) simply sharing their love of music with like-minded souls. There’s no pretence, just passion. The group are comfortable simply being Coldplay – a word that only means one thing: Guy, Jonny, Will and Chris.

Life in Technicolor is a celebration of their first twenty years, as told by the people who were there. The band’s next journey will be full of surprises they tell us, so now, on the eve of their anniversary, it feels like a good time to go back and remember just how far they’ve come.

Chapter Zero: Can Anybody Stop this Thing?

The 20-year story of Coldplay’s ascension to global success is nothing short of a modern-day fairy tale. But, let’s go back to the start, to September 1996, when four students met at University College of London (UCL) and became friends. This is where Big Fat Noises, Starfish and, finally Coldplay burst spectacularly to life.

It was at UCL, at the heart of London’s Euston area, where Coldplay first shook hands. Chris, who travelled to London from Devon “to try and meet Jonny, Guy and Will” had enrolled in Classical Studies. Will was reading Anthropology, Jonny Astronomy and Mathematics, and Guy began with Engineering before switching to Architecture, then ditching studies altogether when the band were beginning to gain record label interest.

The new friends began to hang out together in the student halls of residence, Ramsay Hall, along with Tim Crompton, Kris Foof and Mat Whitecross, the future director of the band’s music videos and film. Chris and Will first met on a coach going to a hockey game, as they played for the university squad. The pair discovered they both played guitar, and soon after busked a selection of cover songs together in nearby Covent Garden.

Jonny, who had arrived at UCL from Mold, North Wales, recounts where he was the first time he met nearly all of his future bandmates: “I remember meeting Will for the first time and Chris too. Chris was running up and down the corridor with this really long curly mop [of hair]. I thought he was a bit mad, a bit wacky. Will was very nice. ”

Their stay at Ramsay Hall in their first year of studies cemented the band’s friendship, and provided a creative environment for the foursome. “One of the great things about being at university was the fact that there was time on our hands. You could structure your day around playing music,” said Will. “And that’s what we did. ”

“I remember in the first week or so people sitting around and playing music. I remember specifically jamming with Chris; there was amazing acoustics on this big stairwell and we just sat and played guitars. There was one jam where I was on the very bottom floor lying down at the bottom of the stairs, and Chris was on the fifth floor – sort of like a five-floor musical experience,” said Will.

The four students used their time in Ramsay Hall to great effect. “We met each other because we were living in the halls of residence,” Guy explained. “It was this block of rooms, everyone had their own room, and downstairs was the bar and the pool table, so everyone met in and around that area, and people would introduce themselves to each other. I can remember meeting them all over a pint. ” Over pool and talk of football, a keen friendship emerged. “What was quite important for us was we all knew each other for about a year before we played any music together, so we did have this friendship which was based purely on friendship rather than being musicians, which I think is key to why we’ve managed to remain so close for so long. ”

While a friendship was forming, not all connections between the foursome were instant. “Guy thought I was an idiot,” recalled Chris. “But then he worked out I had this old Fender Rhodes in my room. It was only then Guy showed an interest. ” The band started playing music together properly, and often, in their second year, using Jonny and Chris’ flat at 268 Camden Road as a rehearsal space.

Out-of-town friends used to visit often, including Gavin Aherne, James “Pix” Pickering, John Hilton and Phil Harvey. There was a bus from Oxford and Phil was on it pretty regularly.

Phil’s memories of meeting Chris’ future bandmates were that Jonny was “wise, kind and gentle,” Will was “strong and witty,” and Guy was “handsome, mysterious and busy. ” “Chris was like a sun in a solar system,” Phil said. “He just happened to get the right pieces of rock to come into his gravitational pull at the right time. ”

In 1997, still in their infancy, Jonny, Guy and Chris decided to make a demo but they were missing a band member – a drummer. At this point in time, the band were using the shortlived moniker Big Fat Noises.