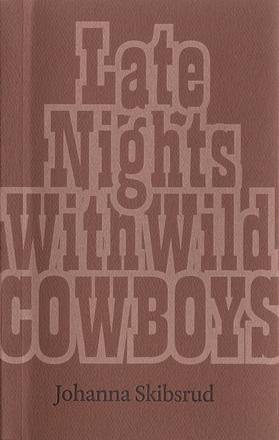 Johanna Skibsrud’s debut poetry collection makes inquiries into that peculiar phenomenon of being alive in the world, opening wide moments of uncertainty in the search for a sense of inner resolve that resembles the outer calm of trees and neighbours. At each step testing ... Read more

Johanna Skibsrud’s debut poetry collection makes inquiries into that peculiar phenomenon of being alive in the world, opening wide moments of uncertainty in the search for a sense of inner resolve that resembles the outer calm of trees and neighbours. At each step testing the waters of her own words, Skibsrud turns her reality over in search of constants.

Skibsrud’s is a world of touchstones. An abandoned boat, her grandmother’s house, a piano, and the annual departure and return of migratory birds are fixtures in the process of coming to know the self, serving both as rhythmic landings and as footholds in a pursuit of understanding.

The collection’s title chapter is a series of takes on the Western genre, its character profiles, sweeping landscapes and the hyperbolic adventures to be had within. Whether based in Nova Scotia, Montana or Arizona, Skibsrud colours the facts with fantastical elements, transforming stories into ballads and road trips into cowboy-studded escapades.

“Sometimes, when I was a little girl,” says Skibsrud, “I would close my eyes and try to press myself to a very fine point. It was an attempt to define myself as both separate from, and integral to, the outside world. It consistently astounded me that the border between the two was so hard to describe. In many ways this book is a continuation of those first efforts. The title, Late Nights With Wild Cowboys, comes from the poem by the same name and is central in that?like many of the poems within the collection?it is about chasing ideas and forms (the problem of where one ends and the other begins), as well as the problem of understanding and expressing the experiences that elude those boundaries. Although light in tone, it’s a poem about seeking always to live more exactly, more deeply?and also about something much larger and simpler that I, because I still cannot define it, write into poems instead. ”

Finalist for the 2009 Gerald Lampert Award.

Johanna Skibsrud’s first poetry collection, Late Nights With Wild Cowboys, was published in 2008 by Gaspereau Press and was shortlisted for the Gerald Lampert Award. She has also published a novel with Gaspereau Press entitled The Sentimentalists. Originally from Scotsburn, Nova Scotia, she now lives in Montreal.