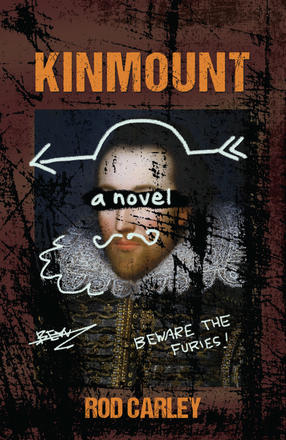 Rod Carley has concocted another hilarious romp behind the theatre curtain - a showdown between artistic freedom and censorship in rural Ontario. Kinmount is the last place down-and-out director Dave Middleton wants to revisit yet there he is directing an amateur production ... Read more

Rod Carley has concocted another hilarious romp behind the theatre curtain - a showdown between artistic freedom and censorship in rural Ontario. Kinmount is the last place down-and-out director Dave Middleton wants to revisit yet there he is directing an amateur production of Romeo and Juliet for an eccentric producer in farm country. And there his quixotic troubles begin. From cults to karaoke, anything that can go wrong does. In one hilarious chapter after another, Dave becomes the reluctant emissary of truth in a comic battle between artistic integrity and censorship. Add in a pesky ghost and a precocious parrot and the stage is set for a summer Kinmount won't soon forget.

Rod's first novel, A Matter of Will, was shortlisted for the 2018 Northern Lit Award for Fiction. His short story, A Farewell to Steam, was featured in the creative non-fiction anthology, 150 Years Up North and More, in 2018. Rod is also an award-winning director, playwright and actor, having directed and produced over 100 theatrical productions to date including fifteen adaptations of Shakespeare. He was the 2009 winner of TVO's Big Ideas/Best Lecturer competition. Kinmount is his second novel. Rod lives in North Bay with his wife, Marian, and their furry family: Arthur Poodle-bum, and a duo of feisty felines, Hilton and Zoe. Visit www.rodcarley.ca for more information and to book Rod for your book club or reading event.

"Rod Carley's Kinmount is a hit that kept me laughing and turning the pages from curtain to curtain. It's funny, thoughtful, compelling, and filled with humane insights about people and their passions. Not since Robertson Davies' Tempest-Tost has a community Shakespeare production been so much fun. " Terry Fallis, two-time winner of the Stephen Leacock Medal for Humour. If you work in theatre, you'll love this book. If you've spent any serious time in small town Ontario, you'll get this book. If you simply like fun writing that makes you smirk and quite possibly snort out loud, this is definitely your book. Carley's view of all these things is truly a delight to witness. Shadflies, Shakespeare, and megalomaniac community censors don't seem as terrify- ing as I remember. All I can say is it's a tale of sound and fury signifying a delightful homage to community theatre. --Drew Hayden Taylor, Author/PlaywrightKinmount is a blast to read. It's fast-paced, engaging, and laugh out loud- funny. If you're not a theatre person, be prepared to enter the crazy world of small town drama in all it's hilarious glory. And if you ARE a theatre person, beware: you'll be wincing (and cheering on) a lot of familiar faces. Get thee to a bookstore and order!--Vern Thiessen, PlaywrightThe story is both entertaining and enlightening for anyone with a love of the classics, Shakespeare or simply a desire for madcap adventure. A wonderful read!!!--Andrew Jackson, ActorKinmount is going to make you howl with laughter. --Dave Carley, Playwright - Taking LibertiesRod Carley's romp through the world of small town theatrical life will be a delight for anyone interested in theatre, small towns, eccentric characters, laughing or finding a way to painlessly gain an insight into Shakespeare and the people who attempt him, keeping in mind the adage that 'we all fail Shakespeare'. --Miles Potter, Director, Stratford FestivalTo open the covers of Kinmount, is to enter a world of theatre, mayhem, magic and small-town hijinks. Rod Carley's masterful novel moves at a page-turning turbo-speed, fueled by razor-sharp wit, unexpected twists andturns, and a cast of characters that leap right off the page. --Heidi von Palleske, author, Two White Queens and the One-Eyed JackIt is a laugh out loud comedy with enough bizarre and even some paranormal twists to keep you breathlessly turning the pages. --Carrie Schiffler, Actor/PoetIn the lively, humorous style of Tom Sharpe and Terry Pratchett, Rod Car- ley's story of a professional theatre director's struggle to produce a communi- ty Shakespeare production in small town Ontario was a wonderfully funny and engaging read. --Ian Farthing, Artistic Advisor, Pacific Theatre, Vancouver, B. C.Kinmount has a high level of sophistication and at the same time pulls the curtain back on the topsy turvy world of amateur theatre. It is well-drawn, full of interesting characters with clever dialogue, funny, and at times, sur-prisingly deep. --Norm Foster, Canada's Most-Produced Playwright