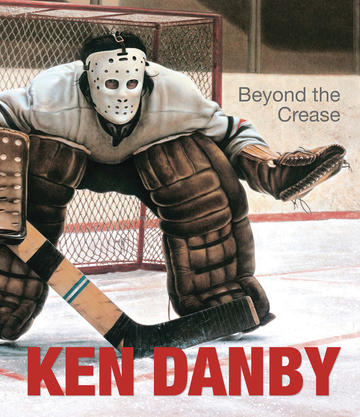 Ken Danby (1940-2007) was one of Canada's foremost practitioners of contemporary realism. Rooted in the Canadian psyche, nourished by his Ontario rural roots, Danby's subject matter was broad and expansive, yet it was the images of Canadian landscapes and life that captured ... Read more

Ken Danby (1940-2007) was one of Canada's foremost practitioners of contemporary realism. Rooted in the Canadian psyche, nourished by his Ontario rural roots, Danby's subject matter was broad and expansive, yet it was the images of Canadian landscapes and life that captured the public's attention. At the Crease, a 1972 egg tempera painting depicting a nameless hockey goalie viewed from ice-level, was his best-known work, and for many, it defined him as an artist.

An accomplished painter, watercolourist, printmaker, and commercial artist, Danby's career began to unfold with a modernist narrative in the 1960s and 1970s. It intersected with the fervent nationalism expressed in the music of Ian and Sylvia Tyson, Gordon Lightfoot, and Joni Mitchell. According to art historian Patrick Hutchings, Danby's paintings bring us "face to face with a moment of our own time. "

Ken Danby: Beyond the Crease, the first major book on Ken Danby's creative practise in two decades, examines the depth and breadth of Danby's work. Designed to accompany a major retrospective exhibition organized by the Art Gallery of Hamilton, it features an essay by art historian Ihor Holubizky, a detailed chronology by Christine Braun, more than sixty reproductions of Danbys major paintings, including At the Crease, Lacing Up, Pancho, and Pulling Out, and dozens of archival photographs, as well as Danby's own words about his life and work drawn from an unpublished autobiographical essay that he completed shortly before his death.

Danby's work is highly collectable and can be found in numerous private and public collections, including those of the Museum of Modern Art, New York; the National Gallery of Canada; the Musée des beaux arts, Montreal; the Art Gallery of Vancouver; the Art Institute of Chicago; and the Brooklyn Museum. Ken Danby became a member of the Order of Canada in 2001.

Ihor Holubizky is the senior curator at the McMaster Museum of Art, McMaster University. He received his PhD in art history from the University of Queensland, Brisbane, Australia. Holubizky has contributed to numerous publications, catalogues, and journals in Canada, the United States, Europe, and Australia over the past thirty-five years.

Greg McKee is an artist and craftsman. He has a BFA from the University of Guelph and worked for Ken Danby as a master printmaker, studio technician, and manager from 1979 until Danby's death in 2007.

Andrew J. Oko is the former director of the Art Gallery of Hamilton.

"The book published by Goose Lane Editions is simply magnificent and for art lovers, a book you’d want in your collection. "

"[The authors] delve deep into methods, intents and motivations behind Danby’s work, and create, ultimately, a fuller, more realized understanding and appreciation for the vision of this true Canadian original. "

Other titles by Ihor Holubizky