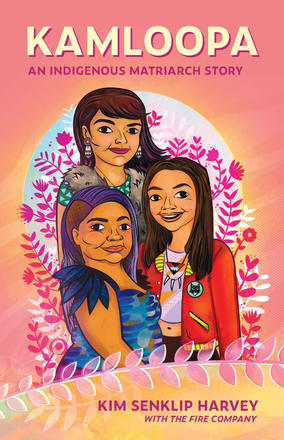 TIME: All.
SPACE: The Multiverse.
Come along for the ride to Kamloopa, the largest Powwow on the West Coast. This high-energy Indigenous matriarchal story follows two urban Indigenous sisters and a lawless Trickster who face our world head-on as they come to terms with what ... Read more

TIME: All.
SPACE: The Multiverse.
Come along for the ride to Kamloopa, the largest Powwow on the West Coast. This high-energy Indigenous matriarchal story follows two urban Indigenous sisters and a lawless Trickster who face our world head-on as they come to terms with what it means to honour who they are and where they come from. But how to go about discovering yourself when Christopher Columbus allegedly already did that? Bear witness to the courage of these women as they turn to their Ancestors for help in reclaiming their power in this ultimate transformation story.

In developing matriarchal relationships and shared Indigenous values, Kamloopa explores the fearless love and passion of two Indigenous women reconnecting with their homelands, Ancestors, and stories. Kim Senklip Harvey’s play is a boundary-blurring adventure that will remind you to always dance like the Ancestors are watching.

Kamloopa: An Indigenous Matriarch Story is the work of Kim Senklip Harvey, a proud Indigenous woman from the Syilx, Tsilhqot’in, Ktunaxa, and Dakelh First Nations, listed for the Gina Wilkinson Prize for her work as an emerging director and widely considered to be one of this land’s most original voices among the next generation of Indigenous artists.

Kim Senklip Harvey is a proud Indigenous woman from the Syilx, Tsilhqot’in, Ktunaxa, and Dakelh Nations and is a director, playwright, and actor. In 2017 Kim was shortlisted for the Gina Wilkinson Prize for her work as an emerging director. In 2018 she was a participant in the Banff Playwrights Lab as well as the Rumbles Directors Lab mentored by Weyni Mengesha. Kim was a participant in the 2017 Banff Residency “Writing in a Racialized Canada”; she is currently taking part in the National Theatre School’s inaugural Artistic Leadership Program, which aims to steward in the next generation of artists to lead the major artistic institutions in this country. In September of 2018, Kim had the world premiere for her new play, Kamloopa, which she wrote and directed. Her next play, Break Horizons, is a commission with the Citadel and Arts Club Theatre which explores the multifaceted laws of the many Indigenous worlds. Kim is a tenacious leader committed to excellence and the equitable opportunity of her people, women, minorities, and the historically disenfranchised and believes storytelling is the most compelling way to provide every community member the opportunity to live peacefully.

“Kamloopa is a hilarious and courageous transformation story. Kim Senklip Harvey makes a generous invitation for all of us to bear witness to the joy, resilience, and brilliance of Indigenous women. ” —Christine Quintana

“Kamloopa brought me an empowerment of self and a reclaiming of knowledge. It brought me sisterhood and ties that have shaped the way I create and approach life. As an Indigenous woman I felt seen, heard, and valid, something we should all experience. Miigwech. ”
—Samantha Brown

“Provocative, hilarious, and shit-disturbing, Kamloopa is at once political, uncompromising, and generous. It centres stories and experiences and BODIES that are almost never given this level of agency, importance, and general badass hilarity. At its centre, Kamloopa claims dissent, humour, and experiences that settler Canadian audiences aren’t familiar with … Brilliant. ” —Marcus Youssef

“Pain is the easiest palette from which to paint, but Harvey’s Kamloopa is a magnificent song of laughter and joy. It is a portrait of Indigenous sisterhood, the likes of which you have never seen before. ” —Tetsuro Shigematsu

“This story about three women who are actively trying to decolonize themselves (whether they realize it or not) resonated deeply … Uplifting the voices of Indigenous women, Two-Spirit, and non-binary folks is incredibly important to our resistance and our communities. Kamloopa is one of those stories providing that platform. ” —Yolanda Bonnell