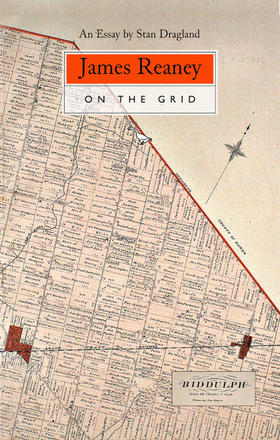 James Reaney on the Grid

James Reaney on the Grid

A deep dive into the influences, patterns and structures that underscore the foundation of the literary works of James Reaney, whose poems and plays marry myth and metaphor with a regional, rural sensibility.

A deep dive into the influences, patterns and structures that underscore the foundation of the literary works of James Reaney, whose poems and plays marry myth and metaphor with a regional, rural sensibility.

This started out as the tenth annual James Reaney Memorial Lecture. It was delivered in London, Ontario, on November 2, 2019. That version turns out to have only scratched the surface of what I've been finding to say about Reaney's literary career. As the talk grew into what it is now, it became ever clearer to me that Reaney's legacy includes one unmistakable masterpiece, the Donnelly trilogy, a play in three parts so magnificent that it stands, or ought to stand, with the work of literary greats anywhere. But there are many other works of real importance, plus a few that may perhaps be worth reading only to someone like me, interested in all of Reaney, because of what all of it has to say about the best of his work.

Before I met Reaney, I had read his A Suit of Nettles with pleasure and puzzlement. I had also heard that he was preoccupied with `the iconography of the imagination'. A graduate student at the time, I was both intrigued and bewildered by that phrase. It was outside my frame of reference. I see now that I was right to be bewildered. I think I've come to know something about what Reaney meant by the iconography of the imagination, but it's not simple. It's not meant to be. So many of the pages that follow will be, directly or indirectly, devoted to trying to clarify the meaning of that phrase, and other complex matters, to the reader of modest competence I model on myself.

Newly graduated, I accepted the offer of a job at The University of Western Ontario, the name since shortened to Western University, where my education began in earnest. I learned from having to teach, and I learned from some of my colleagues, James Reaney chief among them, especially during the two years we were members of the same teaching team--see Chapter 1. For quite some time I was entirely under his spell. I spent my first sabbatical writing an article about his work. Later I edited and wrote the afterword for a collection of essays on his work. Toward the end of his life, I was the editor of his final book of poetry. By that time, though, our warm relationship had cooled. I have said elsewhere that he was to me a kind of father, a literary father. Any father-son relationship has the potential to be fraught. I was with Reaney for quite a few years, and I never lost my admiration for him and for his work, but I did come to realize that we were very different people and very different sorts of writer. Had we been intimate, rather than just friendly, I might have found out what he was thinking when he called me a `postmodernist' just before I was to be interviewed for a documentary on his work in which I called The Donnellys `Canadian Shakespeare'. I knew postmodernist was a bad word in the Reaney lexicon, but it's not something I have ever called myself. He seems to have thought I had gone over to the postmodernist critics who were stressing theory over literature, because I was nibbling at theory, trying to fathom changes in the literary zeitgeist that were happening at the time. I made the mistake, supposing I had wanted to be sure of staying on his good side, of citing some of that current theory in the afterword to Approaches to the Work of James Reaney. Or maybe he could just see that I wasn't turning into the sort of writer and critic that he valued. So there came to be some distance, some heat, between us: growing pains on my side, perhaps some disillusionment on his. We never worked that out.

Because of that unresolved conflict, I had some qualms about accepting the Reaney lecture gig, but my admiration for the work was too strong. One benefit of revisiting Reaney was to burn off pretty well all the negativity I had been harbouring. As I've read and reread the poems and plays and essays, written and rewritten what I found to say about them, the process has been to explicate, yes, but also to work out what I think and feel about many things, literary and otherwise. The result is personal, but, I think, not at all private. It reaches in directions and incorporates material that would never have come to light for me, and never would have come together, had I declined the Reaney lecture. I can hardly pay any higher tribute to my subject than to say how stimulating it has been to try to make my words worthy of his. I'm not going to get any smarter than I am now. This is it. It has taken everything I have to try to measure up to the phenomenon of Reaney. What more could a person want in a subject?

I'm not the only colleague, student or acquaintance of Reaney to have written about his work. To mention only books and monographs, there is James Reaney by old-and middle-English specialist Alvin A. Lee of McMaster University (1968); James Reaney by romanticist Ross Woodman of Western (1971); James Reaney by Reaney's son, James Stewart Reaney (1977); James Reaney and His Works by nineteenth century specialist Richard Stingle of Western (1990); ow to Play: The Theatre of James Reaney by modern drama specialist Gerald Parker of Western (1991); and The Emblems of James Reaney, by Thomas Gerry (2013), a graduate student of Reaney's. Other colleagues and students of Reaney have produced anthologies, articles and interviews. He drew a number of us in, several from academic specialties other than Canadian literature. The list above is the iceberg tip of Reaney criticism, but the interesting thing about those books is that none of us who knew the man takes the same approach to his work. That's one way of saying there is a lot going on in it.

The books just cited are worthy works. With the exceptions of James Reaney, by James Stewart Reaney, who could hardly avoid mentioning that he is writing about his father, and Tom Gerry, whose friendship with the Reaneys appears only in his bio, none of the writers make anything of their personal relationship with the subject. This is quite proper. It's in the nature of most criticism: present your findings objectively, project an authoritative self, efface the authorial I. It's a good way to eschew any egocentric self-aggrandizement. I'm against that too. But the arm's-length approach precludes a level of personal engagement and knowledge that would sometimes be welcome. I knew Richard Stingle better than I knew James Reaney. There was only one office between his and mine on the lower floor of Western's University College. I knew that he and Jamie had been close friends since their undergraduate days at the University of Toronto. Stingle is acknowledged in the first issue of Alphabet magazine, though not by name, as the friend who, back then, showed Reaney a passage from Blake that helped him conquer a creeping nihilism and reaffirm his belief in metaphor as a way of knitting together a fragmenting world. Stingle told me that he saw Reaney's grit way back when others were taking him to be some sort of flower child. I would have loved to read a Stingle memoir of his Reaney days, but that was not his way. The man's intense loyalty came wrapped in a privacy. I'm not telling any secrets here--I don't know any--but I do mean to be up front about my relationship with Reaney. I suppose this is a version of the `full disclosure' that is de rigueur these days, especially in journalism. Perhaps the approach draws my work in that direction, or else towards memoir. Well, any writing, no matter how cool and remote, is a kind of self-portrait of the author. It is so, at least, to any reader who attends not only to what is being said but also to the how of it--the style, the structure and all the rest--to everything that is literary in any prose argument, which is often most effective when it calls little attention to itself. Whether behind the technique, or in it, though, we are all particular people as we write. We have our own predilections and limitations. If a little of that is allowed to show, perhaps something of the subject's complex humanity will also show. Perhaps his or her work will feel like something intimately connected to a maker, rather than some remote, basically inert mass of material to be poked at.

[Continued in James Reaney on the Grid. ..]