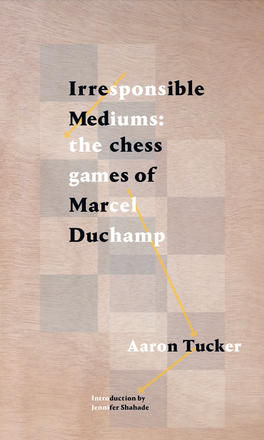 In 1968, avant-garde artist Marcel Duchamp and composer John Cage exhibited Reunion, a chess performance, in Toronto Canada where whenever a player moved a piece, it generated a musical note until the game was transformed into a symphony.

In 1968, avant-garde artist Marcel Duchamp and composer John Cage exhibited Reunion, a chess performance, in Toronto Canada where whenever a player moved a piece, it generated a musical note until the game was transformed into a symphony.

Inspired by this performance, Irresponsible Mediums--poet and academic Aaron Tucker's second full-length collection of poems--translates Duchamp's chess games into poems using the ChessBard (an app co-created by Tucker and Jody Miller) and in the process, recreates Duchamp's joyous approach to making art, while also generating startling computer-made poems that blend the analog and digital in strange and surprising combinations.
With an introduction by Jennifer Shahade, two time U. S. Women's Chess Champion.
Praise for Irresponsible Mediums:
"Marcel Duchamp's chess games played between 1922-1961 come alive with the Chessbard's translation of those games into poetry. This wonderful book by Aaron Tucker of (close to) 100 Opening, Middle, and End game moves generated from source poems by the author is a must read for Duchamp scholars, Digital Humanists, video game theorists, and chess fans. The poetry, along with the introduction by Jennifer Shahade, chess professional and co-author of Marcel Duchamp: The Art of Chess, sets the context for the art and performative aspect of game play. " --Dene Grigar, Professor, Creative Media & Digital Culture; President, Electronic Literature Organization
"As Marcel Duchamp observed, "Beauty in chess is closer to beauty in poetry. " The opposite is also often true. These poems are beautiful gambits that, like the best chess games, delight and intrigue with their elegant and intelligent play. " --Gary Barwin, Winner of the Leacock Medal, and finalist for the Scotiabank Giller Prize, and Governor General's Literary Award for Yiddish for Pirates

Aaron Tucker is the author of three books of poems as well as the novel Y: Oppenheimer, Horseman of Los Alamos (Coach House Books) which was translated by Rachel Martinez into French as Oppenheimer (La Peuplade) in the summer of 2020. He is currently a PhD candidate in the Cinema and Media Studies Department at York University where he is an Elia Scholar, a VISTA Doctoral Scholar and a 2020 Joseph-Armand Bombardier Doctoral Fellow.

Other titles by Aaron Tucker