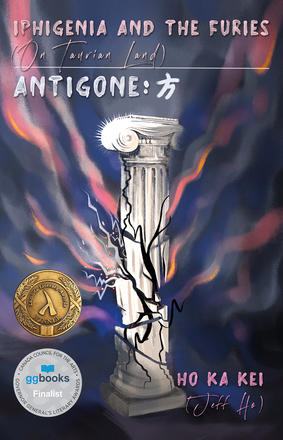 From the author of trace comes two adaptations that transport mythological stories from Ancient Greece to modern-day civilizations. Led by people of colour, these darkly comedic plays depict recognizable plights for justice.

Iphigenia and the Furies (On Taurian Land) highlights ... Read more

From the author of trace comes two adaptations that transport mythological stories from Ancient Greece to modern-day civilizations. Led by people of colour, these darkly comedic plays depict recognizable plights for justice.

Iphigenia and the Furies (On Taurian Land) highlights the repetition of hate and colonialism that occur in ancient myths through a mischievous lens. Since Iphigenia was rescued from the sacrificial altar, she has served as a high priestess to the goddess Artemis on Tauros, where she in turn is to sacrifice any foreigners who try to enter. When she discovers that an exiled prisoner is her brother, they together plot their escape, but are soon confronted by a force beyond their control.

Antigone: 方is set against the backdrop of the Hong Kong Umbrella Movement and Tiananmen Square Massacre protests. When citizens challenge a state’s traditional doctrine, the ruling family is divided between their own interests and those of its citizens. After brothers Neikes and Teo kill each other in the protests, their sister Antigone defies her father’s orders to retrieve Neikes’s body, causing the government—and what’s left of their family—to reach a reckoning.

Ho Ka Kei / Jeff Ho is a Toronto-based theatre artist, originally from Hong Kong. His works include Iphigenia and the Furies (On Taurian Land), Antigone:方, and trace. He has held residencies with the Stratford Festival, Tarragon Theatre, Nightswimming, Cahoots, the Banff Playwrights Lab, and Factory Theatre. Jeff has received a Toronto Theatre Critics' Award for Best New Canadian Play, the Jon Kaplan Legacy Fund Award for Young Canadian Playwright, and has been the recipient of a Harold Award. He has also been nominated four times for the Dora Mavor Moore Award—both as a performer and as a playwright. He is a graduate of the National Theatre School.

The square swells with conflict
But for a dream like second
The Chorus speaks:

Chorus
How strange is the world
How confusing
How clear
How incredible
How disappointing
How angry
How funny
How utterly strange is our world.

But compared to mankind .  .  .
Well,
The world sits back to
How confusing
How clear
How incredible
How disappointing
How angry
How funny
How utterly strange we humans are.

The fish, the sharks, the submerged entities
We take our nets, our knives, and scream
YOUR FLESH IS OURS

We, men, masters of animals
Of cities
Of countries
Of each other
Whipping through our tongues
Speaking like thunder to show just how smart we are
Flaunting our hair
Brushing our faces to show just how beautiful we are
We answer every unknown with an arrogance of
We know it all, we know it all
We know everything

But
Do we?
What happens afterwards?
After the fall?
After we disappear?

What happens when we die?

“His adaptation of Sophocles’ Antigone both relocates this Greek story to reflect Ho’s Chinese heritage and directly challenges the narratives that its audience of 12- to 18-year-olds may be hearing in their classrooms right now, while empowering them to do something to change it. ” (Praise for Antigone: 方)

“The comic timing is flawless; some of the contemporary one-liners could feel glib in less skilled hands, but here they zing. The characters are all emotionally credible, while still bemused by the way the gods have screwed up their lives. ” (Praise for Iphigenia and the Furies (on Taurian Land))

Other titles by Jonathan Seinen