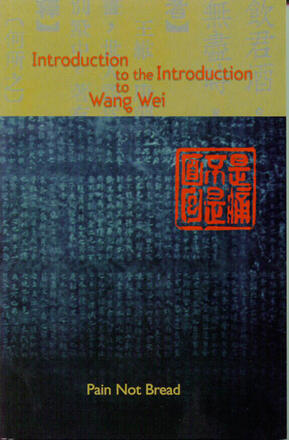 For me, reading the Introduction was like being caught in a spring shower while waiting for the 41, and running into a library to get out of the rain and, because the rain lasts, wandering the aisles on the ... Read more

For me, reading the Introduction was like being caught in a spring shower while waiting for the 41, and running into a library to get out of the rain and, because the rain lasts, wandering the aisles on the fifth floor, taking books from the shelves (Waley's translations from the Chinese, a work by Roland Barthes, an oversized book about eastern birds...), draping my winter coat on a chair and sitting down to read.

My coat smells of wet coconut matting, and the library is warm, and I fall asleep, my head on the desk, and dream about a strange library filled with impossibly rare and impossibly beautiful works: Waley on birds, Barthes' translations from the Chinese, an oversized book about rain...

And when I wake, moments later, after what seems like hours, I have the momentary and vivid conviction that, if I listened properly, I could translate water into any language at all.

Pain Not Bread is a collaborative writing group formed in 1990 by Roo Borson, Kim Maltman and Andy Patton. In Introduction to the Introduction to Wang Wei, they occupy the border created by translation, allusion and echo, and make it into habitable space, a place where the subtle sensitivities of poets from the troubled late Tang Dynasty (Wang Wei, Li Bai, Du Fu, ...) blend with our own millennial anxieties. What do poets do in a difficult time? It's as though Pain Not Bread were talking and drinking with their Tang contemporaries on some old rickety ferry making its way back and forth between English and Chinese, Chinese and English, in the process weaving together a music of supreme nuance and tonal registration, a mode of speaking and feeling which is "undisfigured by sentiment" and yet riddled with its own mortality.

Roo Borson has previously published nine books of poetry, as well as a number of essays and other pieces of non-fiction. She has served as a writer-in-residence at several major Canadian universities, and has given readings across Canada as well as in the U.S. and Australia. She currently lives in Toronto.

Kim Maltman was born in Medicine Hat and grew up in a small town nearby He has previously published six books of poetry, and has given readings across Canada, in Australia, and in the United States. He lives in Toronto, where he pursues research in particle physics and teaches mathematics at York University.

Andy Patton is a painter whose works are included in the Art Gallery of Ontario, the National Gallery of Canada, and various private collections. He represented Canada in the Biennale of Sydney in 1984. A lover of poetry, he is fascinated by the work of Montale and Mandelstam. Since 1991, he has done many paintings in abandoned buildings, often illegally, throughout Southwest Ontario.

"[Roo Borson, Kim Maltman and Andy Patton]'s decade-long project of scholarship and improvisation, aimed at recreating the spirit of Chinese poetry of the late Tang dynasty in new, original poems, has resulted in as rich a collection as you'll find in this, or any, year."--Devin Crawley, Quill and Quire

"Introduction to the Introduction to Wang Wei is replete with humour and wisdom and pleasure ... Reading this book, one gains a sense of participating in a tradition while absorbing new possibilities."--Sheila E. Murphy, Jacket Magazine

Other titles by Kim Maltman