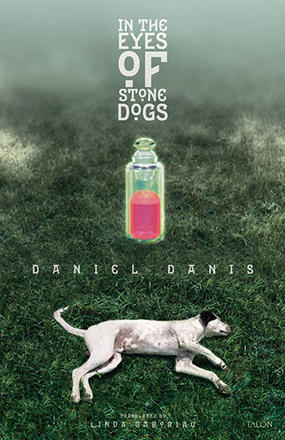 In the Eyes of Stone Dogs

In the Eyes of Stone Dogs

Daniel Danis’s homage to Aeschylus, the ?father of tragedy,” is set on an imaginary island in the St. Lawrence River. The eccentric islanders are about to join in the outdoor ?Rages” staged by the trickster Coyote?wild Bacchanalia where the participants, under the influence ... Read more

Daniel Danis’s homage to Aeschylus, the ?father of tragedy,” is set on an imaginary island in the St. Lawrence River. The eccentric islanders are about to join in the outdoor ?Rages” staged by the trickster Coyote?wild Bacchanalia where the participants, under the influence of his potions, lose all vestiges of their civility and abandon themselves to the elemental forces of life and death.

Under the ever-present eyes of a chorus of dogs, the play opens with Djoukie, holding a series of number eights, symbols of eternity, changing the price at her mother’s Gaz-O-Tee-Pee. Determined to escape this ?real junkpile for a bunch of mental cases,” Djouke wants only to discover the mystery of her paternity before she leaves. But she is unprepared for what she is about to discover: that the day brings on the night, and that all humans are trapped at the heart of this eternal quarrel.

Daniel Danis
Daniel Danis lives in the Saguenay region of Quebec. His first play, Celle-là (That Woman, 1998) was awarded the Governor General’s Award and named best new production by the Syndicat Professionel de la Critique Dramatique et Musicale in Paris. His second play, Cendres de cailloux, won first prize at the Festival international de Maubeuge in France, and was named best new play at the 1994 Soirée des Masques in Montreal.
Linda Gaboriau
Linda Gaboriau is an award-winning literary translator based in Montreal. Her translations of plays by Quebec’s most prominent playwrights have been published and ­produced across Canada and abroad. In her work as a ­literary manager and dramaturge, she has directed ­numerous translation residencies and international exchange projects. She was the founding director of the Banff International Literary Translation Centre. Most recently she won the 2010 Governor General’s Award for Forests, her translation of the play by Wajdi Mouawad.

Other titles by Daniel Danis