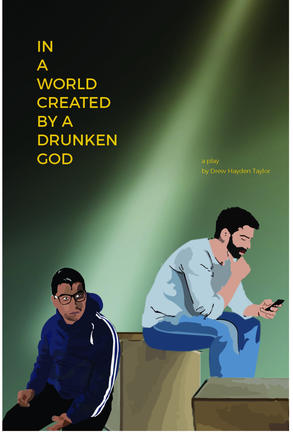 In a World Created by a Drunken God

In a World Created by a Drunken God

Jason Pierce, a 31 year old Canadian half-Native man, is packing up his urban apartment to leave it all behind for his romanticized vision of a return to life on the reserve where he grew up. As he’s leaving, he is paid an unexpected visit by a 34 year old American man, Harry ... Read more

Jason Pierce, a 31 year old Canadian half-Native man, is packing up his urban apartment to leave it all behind for his romanticized vision of a return to life on the reserve where he grew up. As he’s leaving, he is paid an unexpected visit by a 34 year old American man, Harry Deiter, who awkwardly introduces himself as Jason’s half-brother. What Harry wants from Jason is bizarre: to be compatibility-tested for a possible kidney donation to their dying non-Native father, a man Jason has no memory of ever meeting and who, after a brief and secret affair, abandoned Jason’s mother when he was two months old.

Both Jason and Harry are about to have their most fundamental and sustaining beliefs shaken to the core by their respective relationships to the biological father they inadvertently share. Harry, the naïve historical positivist, buoyed up by a lifetime of relative privilege as a member of the dominant imperial culture, encounters in Jason the anger and bitter resistance of the exploited and abandoned colonial, in terms of both Jason’s Native and his Canadian heritage and identity.

Embroiled in the irreconcilable absurdity of their dilemma, Harry is forced to acknowledge that the father he has loved and respected all his life has concealed from his American family his capacity for an absent, heartless cruelty. Jason, on the other hand, must wrestle with the possibility that the man who so thoughtlessly exploited and abandoned his Canadian Native mother and their son may in fact have the capacity to be a loving and present husband and father.

This play raises powerful questions that transcend issues of culture, morality and history?they cut to the ethical quick of what it means to be human in a chaotic world stripped of the comfortable security of identity politics.

Drew Hayden Taylor has done many things, most of which he is proud of. An Ojibway from the Curve Lake First Nation in Ontario, he has worn many hats in his literary career, from performing stand-up comedy at the Kennedy Center in Washington D.C., to being Artistic Director of Canada’s premiere Native theatre company, Native Earth Performing Arts. He has been an award-winning playwright (with over 70 productions of his work), a journalist/columnist (appearing regularly in several Canadian newspapers and magazines), short-story writer, novelist, television scriptwriter, and has worked on over 17 documentaries exploring the Native experience. Most notably, he wrote and directed REDSKINS, TRICKSTERS AND PUPPY STEW, a documentary on Native humour for the National Film Board of Canada.

“Drew Hayden Taylor adheres to the dictates of classic, riveting theatre by presenting stellar characters struggling with hardcore moral questions, while inviting the audience to continue the dialogue after the curtain has dropped … The presentation sure is masterful. ”
— Quill & Quire

“Taylor has succeeded in creating an intriguing and thought-provoking story, with in-depth characters and mind-wrenching questions. ”
— The Multicultural Review

“Drew Hayden Taylor has a deft touch for mixing comedy and commentary in an entertaining and all-Canadian form of social satire. ”
— Vancouver Sun

“Taylor … is a dramatist with a biting sense of humour and a keen eye for irony, particularly in his newly published play, In a World Created by a Drunken God … a play that is by turns quite sad, touching and thought-provoking … The play isn’t just full of funny faux pas or insults; it is a powerful story of two men confronted by the sins of their father, literally … In a World Created by a Drunken God tackles the thorny subjects of culture, morality and history to raise the more basic question of who we really are, apart from convenient labels and identity politics. ”
— Surrey Now

“In Drew Hayden Taylor’s compelling drama, two half brothers meet for the first time. Jason is a half-native Canadian. harry is a non-native American. This well-crafted work pits exploitation and abandonment against privilege and comfort, in an ethical debate that surmounts stereotypes of status and culture. ”
— 2006 Governor General’s Literary Awards Jury

Other titles by Drew Hayden Taylor