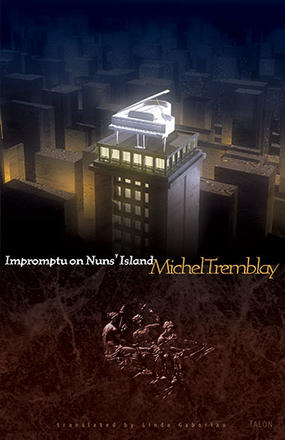 An opera diva, Patricia, (almost 50) meets her Waterloo singing Salomé at the Opéra Bastille in Paris. In an impromptu get-together in her Nuns’ Island penthouse, on the afternoon of her return from Europe, her mother, a popular Montreal stage and television actress (pushing ... Read more

An opera diva, Patricia, (almost 50) meets her Waterloo singing Salomé at the Opéra Bastille in Paris. In an impromptu get-together in her Nuns’ Island penthouse, on the afternoon of her return from Europe, her mother, a popular Montreal stage and television actress (pushing 70), and her idealistic committed-to-new-work daughter (pushing 30) goad her: What is the sense of an international career if your art doesn’t contribute to change (or at least to wide-spread pleasure and inspiration) in the society you live in? An international opera star lives in hotel rooms around the world, so what is the meaning (and the impact) of her art, and on what, or who’s society? Is Patricia right in thinking that in this age of globalization an artist who chooses to stay home is doomed to mediocrity? These questions, this tri-generational drama, are framed by the diva’s gay pianist who packs his bags and comes running to accompany her, whenever and wherever she calls.

Like all of Tremblay’s plays, Impromptu on Nuns’ Island is a multi-layered tour-de-force about art, life and politics from a matchless writer of tragicomic women. Grounded in the myth of the eternal return, the universal and chthonic story of the triple goddess and her androgynous male consort, this impromptu also interrogates the evolution of the role of the artist in Quebec’s increasingly distinct culture and society.

Born in a working-class family in Québec, novelist and playwright Michel Tremblay was raised in Montreal’s Plateau neighbourhood. An ardent reader from a young age, Tremblay began to write, in hiding, as a teenager. Because of their charismatic originality, their vibrant character portrayals, and the profound vision they embody, Tremblay’s dramatic, literary, and autobiographical works have long enjoyed remarkable international popularity; his plays have been adapted and translated into dozens of languages and have achieved huge success throughout Europe, the Americas, and the Middle East.

The French Government, in 1984, honoured Tremblay’s complete body of work when it made him Chevalier de l’ordre des arts et des lettres de France; thereafter, in 1991, he was raised to Officer of the Order. In 2008, he was created Chevalier de la légion d’honneur de France. Tremblay was appointed, in 1991, Chevalier de l’ordre national du Québec and was promoted to Grand Officier in 2015. In 1999, he received the Governor General’s Performing Arts Award. In 2011, he was honoured with the Révolution tranquille medal, given by the Ministry of Culture of Québec, awarded to artists, creators, and artisans who began their careers between 1960 and 1970 and who still have an influence in their field of practice. In total, Tremblay has written twenty-seven plays and twenty-seven novels.