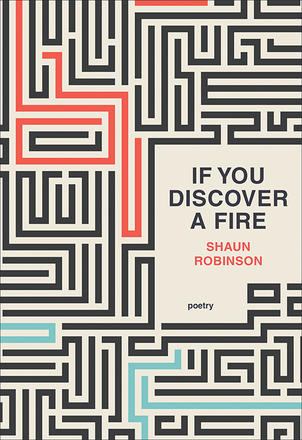 If You Discover a Fire

If You Discover a Fire

Vancouver poet Shaun Robinson's If You Discover a Fire is a debut collection of poems that make a virtue of their failure to communicate. They forage through the syntax and ... Read more

Vancouver poet Shaun Robinson's If You Discover a Fire is a debut collection of poems that make a virtue of their failure to communicate. They forage through the syntax and vocabulary of late-night voicemails, letters to the editor, songs invented in the shower, professional jargon, "Witness Wanted" signs, technical manuals, and text-message typos to assemble verbal collages that raise more questions than they answer. In settings ranging from Montreal's Mile End to a commercial flight above the Midwest to a wildfire in the mountains of British Columbia, these are poems rooted in working-class Canadian experience, poems that flirt with both safety and danger, that drone on like drunken strangers in a bar. Gathering reference from weather reports, football announcers, aerial disappearances, and the movie Groundhog Day, these poems sound their forlorn yawp through the alleys of East Vancouver.

Out on the porch, between shots, he tells you
things you've always known, how the past
and the future are lovers spooning
in bed, and the present is how they don't
quite fit together. (from "Carpe Dos and Carpe Don'ts (FT. Panda Bear)")

"Darkly comic, or just plain dark, these poems offers no assurances, but as the particulars accumulate - all-night gyms, boredom, plastic flowers, rec rooms where children in blindfolds swing wildly at air - they generate a vital, unpredictable force. Like the octopus that sets loose the lid of the jar it's been placed in, If You Discover A Fire has the imagination to outsmart the world's relentless conditions. " --Sheryda Warrener

Shaun Robinson's poetry has appeared in The Puritan, The Malahat Review, Prairie Fire, Poetry is Dead, and The Rusty Toque, and received Honourable Mention in ARC Magazine's 2018 Poem of the Year contest. Born in 100 Mile House, BC, Robinson has lived in Vancouver since 2006. He studied in UBC's Creative Writing MFA program, where he served as the poetry editor of PRISM international. He is also the author of the chapbook Manmade Clouds and currently works as an editor for the chapbook press Rahila's Ghost. If You Discover a Fire is his debut collection.

Well when you try to seize it, the day
turns to sand. And the moment is too little
living space, a broom closet inscribed
on a grain of rice. You've searched for it
for thirty-two years, but it's buried
somewhere deep in the sand on the beach
of all your wasted days. The only time
that exists is the summer of 2013, a time
so dope that Mayan philosophers glimpsed it
in a collective dream and invented
both paradise and apocalypse. And as for
those lemons, the ones life gave you once--
the summer of 2013 saunters into your kitchen
and takes them from your hands, slices them
into sixths, pulling a bottle of Patron
and a shaker of salt from a pocket.
Out on the porch, between shots, he tells you
things you've always known, how the past
and the future are lovers spooning
in bed, and the present is how they don't
quite fit together. For instance, he says,
take that moon, and then he does,
plucking it out of the sky like a lemon
from a tree. It's not a moon at all,
it never was: it's the prettiest moment
you've ever seen, big as a beach ball,
skin like a nectarine. You could do anything
in a moment like that--you could fall
asleep in a pile of warm laundry.
You could call your estranged mother
or rollerskate over a burning bridge.
And now the summer of 2013 is lifting it
over his head. And now he's bringing it down
across the railing, and now it splits open
and the juice trickles out, the unadulterated
juice of authentic, one-hundred-percent-real
time. And now he's filling his cupped palms,
he's lifting them to your mouth, and he whispers,
Now that's what I call lemonade.

We met in a bar the width
of a hallway leading nowhere.
You asked me my sign in a neutral
tone. I covered my mouth
with a placemat when I yawned.
I read to you from a book
of burnt-out matches.

You said you didn't want to put
labels on it, but I'd just bought
a label maker. You looked at a fern.
You opened the fridge. You described
your past as a reluctant ode
to Shopper's Drug Mart. I fell
asleep in a pile of sporting goods.

For years I worked under the table,
that one from the phrase "farm to table,"
while you wrote a thesis on transit anger.
We argued like agnostics resorting
to prayer. You asked me, "When does
The Wire get good?" I felt complicit
in your library fines.

You drifted into your thirties
like a polar bear on an iceberg.
I wouldn't stop yelling "enhance!"
at the view from the kitchen
window. At night I translated
my sorrow bump by bump
from the braille of a bucket of Lego.

I pursued an aesthetic impulse
into the suburbs. The train slid
over the rooftops like a runaway
attic suite. I curled up inside my fear
like a tuba player in his instrument.
The sky stripped off its blue negligée.
A voice told me where I was.

You waited with your blinker on
for the intersection to clear.
I tended to the campfire of my vices.
On a road trip, you vanished
into the space between rest stops.
When you came back, you spoke
authentic American boredom.
You buried bulbs with a tiny shovel.

You scrubbed the floor like a storm
erasing the names from a map.
I invested my bingo winnings
in abstract pornography.
We fought in parking lots
where pigeons shuffled around
like hungry slippers.

The campus, at night, was roofed
in blue light. The rain seemed
to fall from a stadium ceiling.
We whispered our WiFi password
to the flowers. At midnight, a thousand
coupons expired in a drawer and ivy
climbed the walls like slow, green flame.