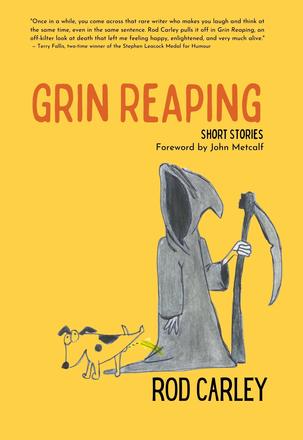 Grin Reaping catalogues the foibles of the fictional Boyle family. In a series of fourteeninterconnected short stories and musings, Rudy Boyle, a Northern Ontario college Englishteacher stuck both in middle age and in the middle of his five siblings, transforms the strangenessof ... Read more

Grin Reaping catalogues the foibles of the fictional Boyle family. In a series of fourteeninterconnected short stories and musings, Rudy Boyle, a Northern Ontario college Englishteacher stuck both in middle age and in the middle of his five siblings, transforms the strangenessof his everyday life into exaggerated home-movie prose. From the significance of tuna fish andBotox, the threat of coyotes and aliens, to the big-ticket items of mortality, gender, climate-change, and Armageddon, Rudy tackles a range of topics with a wry, self-deprecating wit. As hevariously shares such snippets, he exaggerates small and mundane situations into comiccelebrations of the life of the mind, never letting the truth get in the way of a great story. Hisreminiscences deal not only with the absurdities of human nature, but also encompass the grief oflosing family. Rudy is bedeviled by neurosis, and cowed before the insignificant things in hisworld. He talks largely about small matters and trivially about great affairs. It is the nature of hisdilemma and the dilemma of his nature.

Rod Carley's second novel, Kinmount, won the Silver Medal for Best Regional Fiction from the 2021 Independent Publishers Book Awards and was one of ten books longlisted for the 2021 Leacock Medal for Humour. His first novel, A Matter of Will, was a finalist for the Northern Lit Award for Fiction. His short stories and creative non-fiction have appeared in Cloud Lake Literary, Blank Spaces Magazine, the anthology 150 Years Up North and More, the Carter V. Cooper 2022 Short Fiction Anthology, Broadview Magazine, and HighGrader Magazine. Rod was short-listed for 2021 Exile Quarterly's Carter V. Cooper Short Fiction Prize. He is an alumnus of the Humber School for Writers and resides in North Bay, ON.

I don't ride in elevators anymore. I used to. I took the freightelevator to my second floor office each morning at the communitycollege where I teach--out of sheer laziness, navigating the harriedcustodian and her cleaning cart while trying not to spill my collegedark roast.

"Things happen here," she hisses in my ear while wringingher mop. "Good Things Happen Here" was the college mottofor years, until recent budget cuts forced the dropping of the firstword. "Things Happen Here," the unfortunate result. The sloganis plastered on worn-out billboards across the province.

The Tim Horton's micro-franchise moved out after refusingto spice up their digs. A coat of paint would have done it. Thereplacement vendor, Java the Hut, hasn't a clue--his burningcarafes set off the cafeteria smoke alarms on a near daily basis. Hiscoffee tastes like motor oil. Only the auto body repair programkeeps him in business.

But this story is not about the college. It's about Larry andIolanthe.

Larry, a widower, retired from the railroad a year ago. He rodethe last ONR passenger train on a cool September afternoon--nofanfare--like most things in Northern Ontario, here one day,gone the next.

Larry attends Sunday service regularly since his wife Rose'suntimely death. The rest of the week he retreats to his basementto tend to his model railroad collection. He pretends he and Roseare travelling to the Rockies in a sleeper car--a holiday cancelledby cancer.

I sit quietly beside Larry in church in a pew at the back. Hepresses his short chubby frame uncomfortably into the seat cushion. Larry has never been at home in his body--he's more of a squatter.

The congregation discovered Larry is tone-deaf. He is neithera bass nor a baritone, rather, an unfortunate hybrid that has noplace in liturgical music, and, when the moment urges him, a voicethat causes parishioners to bow their heads in resigned pity beforeincreasing their volume to drown him out. To stand next to Larryis to endure an arpeggio of aural agony. He goes sharp when thehymn asks for a solemn note, and swoops down flat when the tunecalls for a more uplifting pitch.

It isn't that Larry has a terrible voice. ..in musical parlance, hehas a bad ear.

I've never been much of church-goer. I had all the excuses fornot attending--I didn't have kids, my phone said No Service, Icouldn't get the lid off the peanut butter.

One Sunday afternoon in mid-May, Clive, the head of thechurch Men's Group, pegged Larry to be the lift operator for themonth of June. A volunteer was needed to operate the elevatorthat delivered disabled parishioners from the main foyer on theground floor at street level to the second-floor sanctuary and,after service, escort them two floors down to the Sunday SchoolHall in the basement for coffee and sweets. Church and food gohand-in-hand. They always have, ever since Jesus fed five thousandpeople with two fish and a loaf of bread.

The lift operator opened the church an hour prior to the choir'sopening hymn, turned on the lights and the blowers (in winter)and made sure the doors were locked once the service had begun. The surveillance camera monitor, at the back of the sanctuary,took care of the rest. Save for wrestling with the Allen key in thefront door, it was not a daunting task.

But there were politics--politics named Clive. I've never taken a liking to Clive. Clive looks and acts like anassistant manager at a Boston Pizza. He is the kind of guy who isterrified of grief. So, when Clive encounters anyone experiencingloss, he avoids them completely, as if his frigidity will somehowstop him from catching their pain. Clive has to be afraid ofsomething big. It is probably why he goes to church in the firstplace--to pray for grief to spare him. The poor bastard has it allbackwards. Clive is a dyslexic Christian.

Once in a while, you come across that rare writer who makes you laugh and think at the same time, even in the same sentence. Rod Carley pulls it off in Grin Reaping, an off-kilter look at death that left me feeling happy, enlightened, and very much alive.

Rod Carley's previous book Kinmount was nominated for the Stephen Leacock Medal for Humour. He may well win that award for this warmly moving, wildly inventive and wickedly funny collection of tall tales. One of the great compliments you can give a book is to say, "you can't put it down. " That doesn't apply to Grin Reaping. You will have to put this book down repeatedly because you will be laughing so hard. Indeed, you will laugh out loud on almost every single page. So settle down, buckle up, and prepare yourself.

"Imagine if a short story and a peculiar incident had a wisecracking baby possessed of unusual wisdom and a deeply humane sensibility. That almost, almost describes Rod Carley's Grin Reaping. Line-by-line these episodes are fierce and funny and many of them leave indelible scorch marks on their targets, even while we grow to care about all the characters. The collection is generous, odd and quite wonderful. I hope many people get to meet the unforgettable Rudy Boyle and his associates. I, for one, will never think about MacGyver the same way again. My view of elevator lifts, dogs, and weddings has also been altered forever. And please, do not get me started on the exceptional tooth-regeneration of the brontosaurus.

,p>Susan Juby, author of The Woefield Poultry Collective and winner of the Stephen Leacock Medal for Humour

"When I say I laughed out loud at Grin Reaping, I mean it. Carley writes with a quick wit, keen observational skill, and a sense of playfulness that infuses the language on every page. But to classify this as simply a "funny" book does it a disservice--beneath the surface, this is a book with a truly tender heart. These are stories shot through with a current of grief and loss, and populated with unforgettable characters who, despite their clever jokes and quirky worldviews, are authentic, vulnerable, and wholly human. Grin Reaping is a joy to read, and Rod Carley is a writer to watch. "

Amy Jones, author of We're All in This Together, shortlisted for the Leacock Medal for Humour

"Carley scribbles in that special space between humour and humiliation, the quaint and the absurd. The stories in Grin Reaping are both familial and familiar, cheeky, wistful and human on the best level. His playfulness with language and comedic timing are masterful. Read it and reap.

Ali Bryan, author of The Figgs, shortlisted for the Leacock Medal.

"If you explore some of Canada's more picturesque literary trails, you might happen upon the spot where Robertson Davies' "The Diary of Samuel Marchbanks" intersects with Stephen Leacock's "Sunshine Sketches of a Little Town" as well as the best Dave and Morley stories from Stuart McLean's "Vinyl Café. " That's where you'll find Rod Carley's Grin Reaping, a collection of short stories blending whimsy, pathos, melancholy and cheer. You'll find elevators to heaven and talking pets sharing the page with the stark realities of aging, death and dementia. It's an emotionally complex journey, both uplifting and heartbreaking, and it's a literary trip I'm glad to have taken. "

"Grin Reaping is a comic blast of a book. It's so wryly observed with sharply hilarious specifics -- one page in and I found myself booted back to my tiny Canadian hometown with all its rural absurdities. Rod's got a gift for giving dignity to people who'd probably snort-laugh if you ever called them 'dignified'. In these pages, you'll find a definitive power ranking of Timbits decided by teachers enduring a winter work strike. You'll read of friends and family caring for their pets -- be they hermaphrodite border collies or the ghosts of long-dead cats. And you'll learn about a man who constructed a shrine to Muskoka via Hollywood celebrity Kurt Russell. But you'll also realize what a huge heart Rod Carley has, as he lovingly (in a very Rod Carley way) eulogizes family members he's lost by transforming their lives into enduring small town myths. " 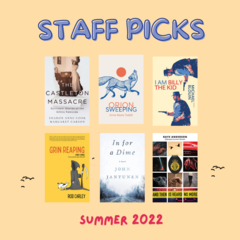