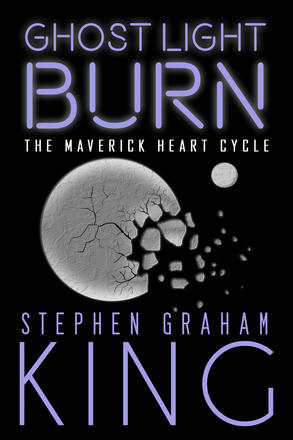 As the Gate Project expands, building stable, artificial wormholes in orbit around ever more worlds in the Pan Galactum, its hunger for construction materials grows exponentially. But the discovery of the dead binary planets, Sound and Fury, may finally sate the project's hunger ... Read more

As the Gate Project expands, building stable, artificial wormholes in orbit around ever more worlds in the Pan Galactum, its hunger for construction materials grows exponentially. But the discovery of the dead binary planets, Sound and Fury, may finally sate the project's hunger ten times over.

In the shadow of massive, shattered Fury comes an interstellar travelling theatre, bringing with it an old friend of the Maverick Heart crew. One with a nose for trouble who soon discovers a conspiracy of embezzlement, greed, and corporate apathy too deep to investigate alone.

When Ember receives the call for help, it is a mystery too enticing for him, Keene, Lexa-Blue, and Vrick to pass up. One that will take all their skills to unravel before time runs out and the whole system burns.

Stephen Graham King lives in Toronto. His first book, Just Breathe, tells the funny, blunt, uncompromising story of his three year battle with metastatic synovial sarcoma. Since then, he has concentrated on writing speculative fiction, in particular, queer-themed space opera, and his short fiction has appeared in the anthologies North of Infinity II, Desolate Places and Ruins Metropolis. His first novel, Chasing Cold, was released in 2012, followed by the first books in the Maverick Heart Cycle, Soul's Blood, (2016) and Gatecrasher (2017).

The Maverick Heart tumbled out of interspace with a gut-wrenching lurch, the ship's inertia bleeding off in a bilious plume of yellow-green energy along es previous trajectory.

Vrick felt emself continue along es programmed heading, the sudden deceleration still dispersing as ey struggled to hold es hull together. Nauseating agony coursed along es underside, and ey identified the source as radiating from the inertial nullification baffles along the main drive assembly. Damping down the pain response, ey set up an alert to notify em of further damage without the searing ripple across es consciousness.

Es mind now clear, ey could truly assess the situation rationally. Or as rationally as any sentient being could after such a sudden brush with destruction. Sparing two seconds, ey ran full systems diagnostics just to ensure that ey was not on the verge of blowing apart.

Turning es attention inwards, in the blink of a human eye, ey saw that es internal crash fields had properly engaged, solidifying the air around es human friends, and keeping them from being smeared into paste on es interior walls.

And that is just hell to get out of the upholstery, ey thought wryly.

As it was, all three were currently suspended, as flies in invisible amber, waiting for release.

In the next fraction of a second, ey turned es attention to the monitor systems that allowed em to track the medical data on es crewmates through the knowledge nodes implanted in their skulls. Reams of biodata streamed across es senses, and relief flooded through em. All three were alive, and in no imminent danger of death. All the expected neurotransmitters and hormone compounds that one would expect from a recent brush with immolation were there, and there were spikes of pain coming from Keene's shoulder, but they didn't seem to be life-threatening. A thought from Vrick checked the auto-doc and cycled it up into readiness to deal with Keene's injury.

Satisfied that neither ey nor the others were in imminent peril, ey pulsed es normal space drive field gingerly to bring them to a stop. Ey cycled down the main drives to the bare minimum, just enough to keep emself from drifting. Relief coursed through es systems as the strain on them eased.

Less than thirty seconds had elapsed since their return to normal space, but ey still felt logy and disoriented. I'm slowing down in my dotage, ey thought.

Ey keyed the gentle release of the crash fields, es internal atmosphere softening slowly around the three fragile human bodies and lowering them. Ey saw them shift their positions slowly and felt, through es monitors, their muscles protesting from the sudden immobilization that had saved their lives.

A thought brought back the damage and pain sensors from es damaged systems and ey winced at the cascade of unpleasant sensations coursing through em.

"When you merge a heist plot with space opera and add the crew from the Maverick Heart, the result is page-turning magic. Ghost Light Burn is Stephen Graham King at his best. " Cait Gordon, author of The Stealth Lovers