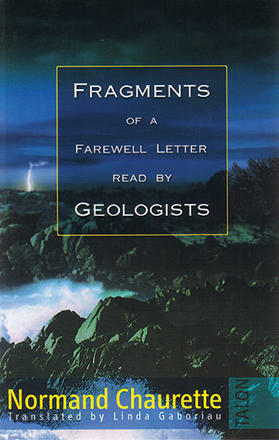 Fragments of a Farewell Letter Read by Geologists

Fragments of a Farewell Letter Read by Geologists

Fragments of a Farewell Letter Read by Geologists is a dramatized inquiry in which five geologists are interrogated about the death of one of their colleagues in the Mekong Delta, Cambodia.

It is a play about the beginnings and endings of all things. It is a ritualized drama ... Read more

Fragments of a Farewell Letter Read by Geologists is a dramatized inquiry in which five geologists are interrogated about the death of one of their colleagues in the Mekong Delta, Cambodia.

It is a play about the beginnings and endings of all things. It is a ritualized drama in which meaning is stripped first from reason, then from authority, then from language, then from geography, and finally from the body. Washed away by the rain, both deafening and silent. It is an investigation into the mystery of the wound of life opened up by a bolt of lightening striking a primordial, featureless sea, and the return of all things to that sea. There is no mystery here but The Mystery. It is a play of specific speech, probing dialogue, investigative interrogation, but no narrative.

This is experimental theatre of the very best kind because it succeeds in extending the possibilities of what can be contained by the conventions of the dramatic form in a way that does not betray either the subject or the form.

Cast of one woman and six men.