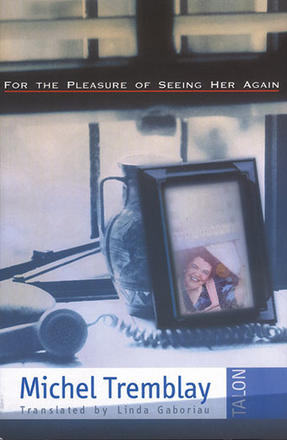 For the Pleasure of Seeing Her Again

For the Pleasure of Seeing Her Again

For the Pleasure of Seeing Her Again is Tremblay’s homage to his mother, who nurtured his imagination, his reclusive reading habits and his love for the theatre and the arts, yet who did not live to witness the performance of Les Belles Soeurs—the first successful play written ... Read more

For the Pleasure of Seeing Her Again is Tremblay’s homage to his mother, who nurtured his imagination, his reclusive reading habits and his love for the theatre and the arts, yet who did not live to witness the performance of Les Belles Soeurs—the first successful play written in joual with which Tremblay legitimized the Quebecois vernacular in the arts—and the world-wide acclaim for her son’s artistic genius. In a compelling balance of humour and poignancy, Tremblay offers glimpses of himself and his mother at five different stages of their lives together, culminating in his reassurance of his dying mother’s concern for him immediately prior to his spectacular success.

“a lovely, funny, poignant look at Tremblay’s close relationship with his animated, storytelling mom … Tremblay’s play has all the earmarks of the classic, universally recognized mother-son relationship. … the larger picture and subsequent reach of the piece is wide…”
– The Province

“. ..the nearly 20-year-old script’s success is its universality, achieved by illustrating how a boy is shaped by his mother and her stories. … honest and sweet, managing to stir emotions without leaving us dewy-eyed. … This one doesn’t disappoint. ”
– Richmond News