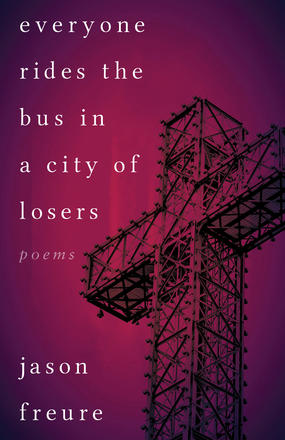 Everyone Rides the Bus in a City of Losers

Everyone Rides the Bus in a City of Losers

In the words of Margaret Thatcher, “A man who, beyond the age of 26, finds himself on a bus can count himself as a failure. ” Everyone Rides the Bus in a City of Losers is about wandering Montreal’s streets, with an eye on the storefronts and alley cats, and one foot ... Read more

In the words of Margaret Thatcher, “A man who, beyond the age of 26, finds himself on a bus can count himself as a failure. ” Everyone Rides the Bus in a City of Losers is about wandering Montreal’s streets, with an eye on the storefronts and alley cats, and one foot already in the nearest dive bar. From a series of poems about every station on the Metro to music venues long shut down, it’s sometimes fantastical, nostalgic, funny, and even joyful — a sucker for landmarks, always looking out for glimpses of the Farine Five Roses sign, the Jacques Cartier Bridge, the cross on Mont-Royal, and anything still neon.

Montreal’s rich literary tradition is celebrated: A. M. Klein, Leonard Cohen, Heather O’Neill, Gail Scott, Richard Suicide, and Gaston Miron all make their way into the poems. The book also ventures from the hip hot spots of The Plateau and Mile End to Verdun, Côte-des-Neiges, NDG, St-Henri, Petite-Patrie, and Ahuntsic. A restless spirit propels the text further and further into new neighborhoods, but always returns downtown.

This is a book about those who’ve seen the city turn its back on them and leave them out in the cold. Who get lost in boroughs east and west. Who get lonely, garble their French, and never manage to find a seat at their favorite coffee shop. In Jason Freure’s psychogeography, everyone’s a flaneur. And everyone rides the bus.

Jason Freure’s poems have appeared in publications like Vallum, Epiphany, and Show Thieves: An Anthology of Contemporary Montreal Poetry. He also writes essays about Montreal, which have been published in Canadian Notes and Queries and Carte Blanche. He is an editor at The Puritan. After years in Montreal, he now lives in Toronto.

No, I will never be as cool as the guy from Les Deuxluxes,

even if I buy him shots and quote his covers,

Will you never love me, Anna Frances Meyer?

But moustaches always made me think of arcade perverts

and my neighbours in Verdun.

After Nirvana played the Verdun Auditorium,

they found Courtney at Bar Côte St-Paul by the Cash’N’Loan.

was it more Massey than Tony Wilson?

If she skips another shower, will the bartender at La Rockette

The guy from the band says that I should go.

But I won’t go. Not until I meet Anna Frances Meyer.

Not until last call lights up the walls

and she finds me in the bathroom stall writing,

The last place I went was Ultramar.

I walked my friends there and said,

“You can hail a cab at Ultramar,”

the Ultramar where I bought ketchup chips

and Coffee Crisps and one time even Ringolos.

Only the night attendant knew my love of Swedish Berries

Only the night attendant who blasted Appetite for Destruction

for M&M’s and Pez dispensers.

I bid my friends adieu at Ultramar.

They claimed Verdun was the middle of nowhere.

It’s only the edge, I said to them.

Nowhere is somewhere west, out past the neon

My friends scrambled into taxis

I bought a coffee at Ultramar.

I caught the night attendant air-guitaring.

I had to move by twelve o’clock.

“A nostalgic, irreverent debut collection arranged according to the city’s metro. Simultaneously flaneur and commuter (“a young man with a notebook”), Freure brings fragments of time and place together in a profound record of lived experience. ” — Publishers Weekly

“A poetic tour of the underside of Montreal. There are no botanic gardens on this tour or Museums of Fine Arts or Parc Jean Drapeau. This is the real Montreal that most do not see but like any big city, it is always there but rarely talked about. ” — Evil Cyclist blog

“Through his exploration into the diversity of his city, as rendered through descriptions of metro stations, neighborhoods, and local establishments, Freure’s speaker has created for readers an unrepeatable experience of Montréal, and has managed to render it both familiar and unfamiliar, even to those who have lived there their whole lives. ” — Ploughshares blog

“Jason Freure’s work was new to me, and I would certainly look for more of it . . . Freure’s incantations are breathless, urban and gritty. ” — Broken Pencil

“His debut collection movingly moves through the city’s streets and public transportation infrastructure, doubling back again and again to wryly catalogue the myriad losses of artists and service economy workers. ” — Canadian Literature